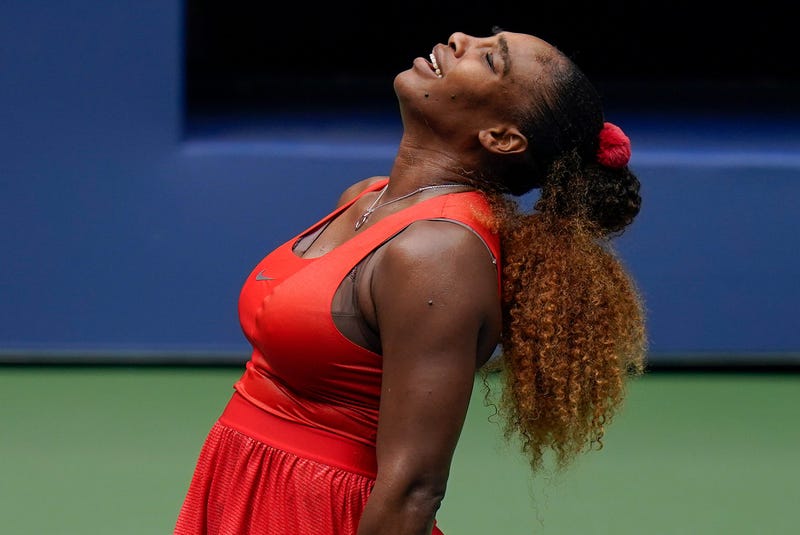 Photo credit Serena Williams, of the United States, reacts during a match against Tsvetana Pironkova, of Bulgaria, during the quarterfinals of the US Open tennis championships, Wednesday, Sept. 9, 2020, in New York. (AP Photo/Seth Wenig)
By The Associated Press

Serena Williams has pushed her U.S. Open quarterfinal against Tsvetana Pironkova to a third set.

Pironkova took the opening set 6-4, then went up a quick break at 1-0 in the second.

But Williams broke back right away, then again to lead 5-3 by taking a 24-stroke exchange, and served out that set at 6-3.

Williams is seeded No. 3 and seeking her record-tying 24th Grand Slam singles title.

Pironkova not only isn't seeded, she isn't even ranked at all, because this is her first tournament at any level in more than three years. She took time away from the tour to become a mother.

Serena Williams has dropped the first set of her U.S. Open quarterfinal against unseeded Tsvetana Pironkova by a 6-4 score.

Pironkova is playing in her first tournament in more than three years after taking time off to become a mother.

She broke Williams to lead 3-2, then failed to convert two set points while Williams served at 5-3.

But Pironkova served it out in the next game. She won 20 of the 25 points she served in that set.

Serena Williams is about to start her U.S. Open quarterfinal against unseeded Tsvetana Pironkova.

Pironkova is a 32-year-old from Bulgaria who is playing in her first tournament since she took a break of more than three years while having a son.

The other women's quarterfinal on Wednesday's schedule is No. 16 seed Elise Mertens against unseeded Victoria Azarenka, who has a nine-match winning streak.

The men's quarterfinals Wednesday are No. 2 seed Dominic Thiem against No. 21 Alex de Minaur and No. 3 Daniil Medvedev against No. 10 Andrey Rublev in an all-Russian matchup.

Medvedev was the runner-up in New York last year.