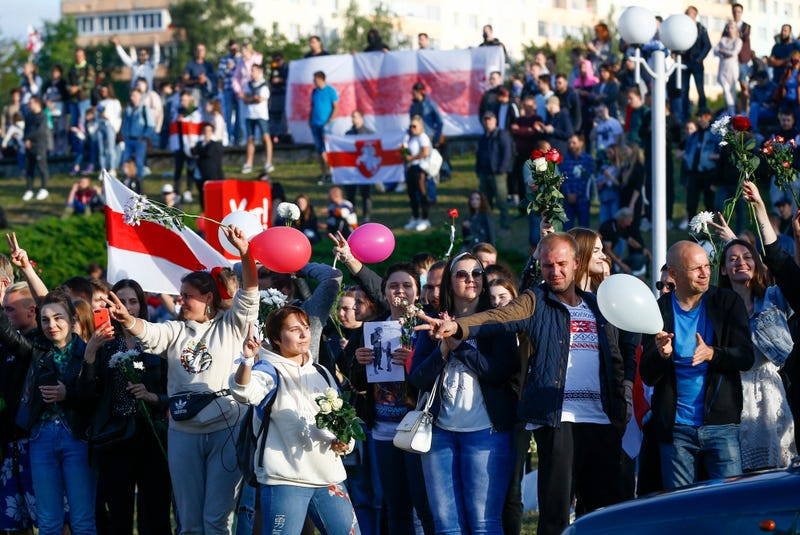 Photo credit People with flowers and old Belarusian national flags gather to protest against the results of the country's presidential election in Minsk, Belarus, Thursday, Aug. 13, 2020. Crowds of protesters in Belarus swarmed the streets and thousands of workers rallied outside industrial plants to denounce a police crackdown on demonstrations over a disputed election that extended the 26-year rule of authoritarian President Alexander Lukashenko. (AP Photo/Sergei Grits)
By The Associated Press

MINSK, Belarus (AP) — Crowds of protesters in Belarus swarmed the streets and thousands of workers rallied outside industrial plants Thursday to denounce a police crackdown on demonstrations over a disputed election that extended the 26-year rule of authoritarian President Alexander Lukashenko.

In several areas of the capital, Minsk, hundreds of women formed long “lines of solidarity." Many were dressed in white and carried flowers and portraits of loved ones who have been detained during protests that began shortly after Sunday's vote, which they said was rigged.

The human chains grew quickly, and by early afternoon filled the main central squares and avenues. Motorists honked in support. In Minsk and many other cities, thousands of factory workers also rallied against the police violence, raising the prospect of strikes in a new challenge to the government.

Amid growing public dismay, dozens of military and police veterans posted videos in which they dumped their uniforms and insignia in the trash. Several popular anchors at Belarus’ state TV stations have quit.

Nearly 7,000 people have been detained and hundreds injured in the clampdown on demonstrators protesting the official results that said Lukashenko won 80% of the vote and his top opposition challenger got only 10%. Police have broken up protests with stun grenades, tear gas, rubber bullets and severe beatings.

“Belarusians have seen the villainous face of this government. I argued with my husband and voted for Lukashenko. And this is what I got in the end — I can't find my relatives in prisons,” said Valentina Chailytko, 49, whose husband and son were detained in protests Sunday. She has been unable to get any information on their whereabouts.

“I wonder how Lukashenko could keep ruling,” she added.

One protester died Monday in Minsk after, the Interior Ministry says, an explosive device he tried to throw at police blew up in his hand. Some media reports have challenged that official version. Neither the ministry nor the media outlets have provided evidence.

Thousands of people converged Thursday on the place where he died, many carrying flowers. European ambassadors also laid flowers at the site earlier in the day.

The authorities also confirmed that a detainee died in the southeastern city of Gomel, but the circumstances of his death weren't immediately clear.

The unprecedented public opposition and unrest has been driven by the painful economic fallout from the coronavirus pandemic and Lukashenko’s swaggering dismissal of the outbreak as a “psychosis.” The vote and the brutality of the subsequent crackdown — remarkable even for Lukashenko’s iron-fisted rule — have made the anger boil over. The 65-year-old former state farm director has been in power since 1994 and was nicknamed “Europe’s last dictator" by the West for his suppression of dissent.

“You can see the election result in the streets,” said 32-year old engineer Andrei Gubarevich, who joined a demonstration in Minsk. “Lukashenko has already lost.”

The Interior Ministry reported 700 new detentions late Wednesday and overnight, bring the total number of detainees to 6,700 since Sunday. Belarus’ Investigative Committee launched a criminal probe into the organization of mass rioting — an indication authorities may start leveling those charges against some of the detainees. The charges could carry prison terms of up to 15 years for those found guilty.

The ministry said 103 police officers have been injured since Sunday, and 28 of them were hospitalized. In Minsk and the western city of Baranovichi, people ran over traffic police with their vehicles on Wednesday before being detained.

The brutal suppression of protests drew harsh criticism in the West.

The European Union foreign ministers are set to meet Friday to discuss a response, and German Foreign Minister Heiko Maas said the 27-nation bloc would “increase the pressure” on Belarus. "The brutal actions and the arrest of peaceful protesters and even journalists in Belarus isn’t acceptable in Europe in the 21st century,” he told reporters in Berlin.

U.S. Secretary of State Mike Pompeo said the election wasn't free or fair and urged the government to refrain from violence against peaceful protesters.

“I’m confident that EU and the United States fully share the same concerns about what has taken place and what is taking place in Belarus and I’m very hopeful that we can collectively work in a way that gets a better outcome for the people of Belarus,” Pompeo said Thursday on a visit to Slovenia.

Police appeared to scale back their response on Wednesday. In many parts of Minsk, the all-female “lines of solidarity” stood unchallenged for some time before police dispersed some of them without violence. Similar peaceful demonstrations were seen across the capital and other cities Thursday, but police refrained from dispersing them immediately.

Also Thursday, hundreds of workers at plants across the country, including the huge truck factories in Minsk and Zhodino, held rallies to protest the clampdown and demand a recount of the vote. Many shouted “Go away!" to demand Lukashenko's resignation.

During a meeting with workers of a plant in Grodno, near the border with Poland, the local police chief apologized for the violent crackdown, according to tut.by news portal.

The demonstrations have spread even though the protest lacks leaders. The top opposition challenger in the vote, Sviatlana Tsikhanouskaya, suddenly emerged Tuesday in neighboring Lithuania and called on her supporters to stop protests in a video that her associates said was recorded under pressure from law enforcement officials before she left. The 37-year-old former teacher joined the race to replace her husband, an opposition blogger, who has been jailed since May.

Lukashenko has derided the political opposition as “sheep” manipulated by foreign masters and vowed to continue taking a tough position on protests.

But that has not deterred many.

“Protests will only grow,” said 25-year-old demonstrator Anna Shestakova in Minsk. “They can cheat some, but they can't cheat the entire people.”