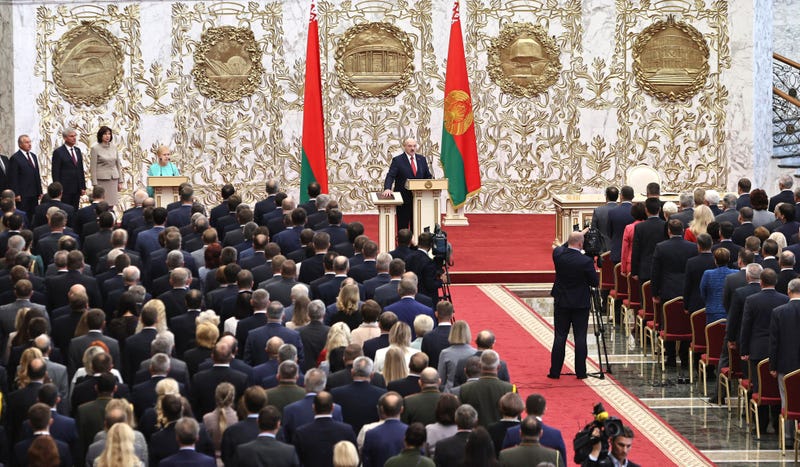 Photo credit Belarusian President Alexander Lukashenko takes his oath of office during his inauguration ceremony at the Palace of the Independence in Minsk, Belarus, Wednesday, Sept. 23, 2020. Lukashenko of Belarus has assumed his sixth term of office in an inauguration ceremony that wasn't announced in advance. State news agency BelTA reports that the ceremony will take place with several hundred top government official present. (Sergei Sheleg/Pool Photo via AP)
By The Associated Press

LONDON (AP) — Britain is preparing sanctions on individuals allegedly involved in human rights violations in Belarus, working with the United States and Canada to hold President Alexander Lukashenko and his government to account.

Foreign Secretary Dominic Raab told the House of Commons in London on Thursday that in light of the European Union’s delay in preparing its own sanctions, the U.K. would join other allies to adopt targeted sanctions against those responsible for human rights abuses.

“We will apply all the tools at our disposal to hold Lukashenko and his regime to account,’'' he said.

Thousands of Belarus citizens have taken part in nearly seven weeks of rallies against the authoritarian leader’s reelection, which the opposition says was rigged.

“We are willing to join the EU in adopting targeted sanctions against those responsible for the violence, the repression and the vote-rigging, although the EU process has now been delayed in Brussels,'' Raab said. “Given that delay ... we’re co-ordinating with the United States and Canada to prepare appropriate listings as a matter of urgency.”

The EU said Thursday that the swearing in of Lukashenko on Wednesday to a sixth term during a secretive ceremony lacks democratic legitimacy, defies the will of the Belarusian people and will only deepen the country’s political crisis.