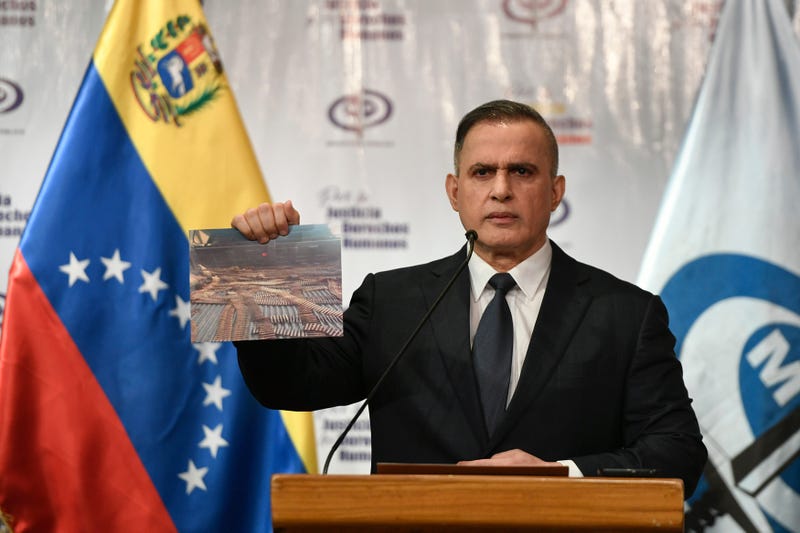 Photo credit Venezuela's Attorney General Tarek William Saab holds a photo of bullets he says were seized with other weapons in connection with what the government calls a failed attack over the weekend aimed at overthrowing President Nicolás Maduro, during a press conference in Caracas, Venezuela, Friday, May 8, 2020. (AP Photo/Matias Delacroix)
By The Associated Press

The man, alleged to have CIA ties, had help from three Venezuelan conspirators, who were arrested with him last week near a pair of oil refineries on the north Caribbean coast, Venezuela's Chief Prosecutor Tarek William Saab said on state television.

The prosecutor showed pictures of equipment allegedly seized from the group, including a grenade launcher, plastic explosives, a satellite phone and a bag of U.S. dollars. Authorities said cellphones taken from the men when they were arrested last week include images of a large bridge in Zulia state, military installations and dilapidated oil refineries in Falcon state.

“Everything here could qualifies as a lethal weapon designed to cause harm and to promote assassinations, crimes against the people of Venezuela,” said Saab, who also accused the man of planning to open a drug trafficking route through Venezuela.

The investigation also landed the arrest of four other Venezuelans, authorities said.

Saab said Heath had worked in Iraq as a communications specialist three months each year from 2006 to 2016 for MVM Inc., a Virginia-based private security contracting company. The firm did not immediately respond to phone and email messages seeking comment.

The arrest follows a failed beach incursion in early May that landed two ex-Green Beret soldiers in a Venezuelan jail for allegedly participating in a failed attempt to overthrow the socialist government.