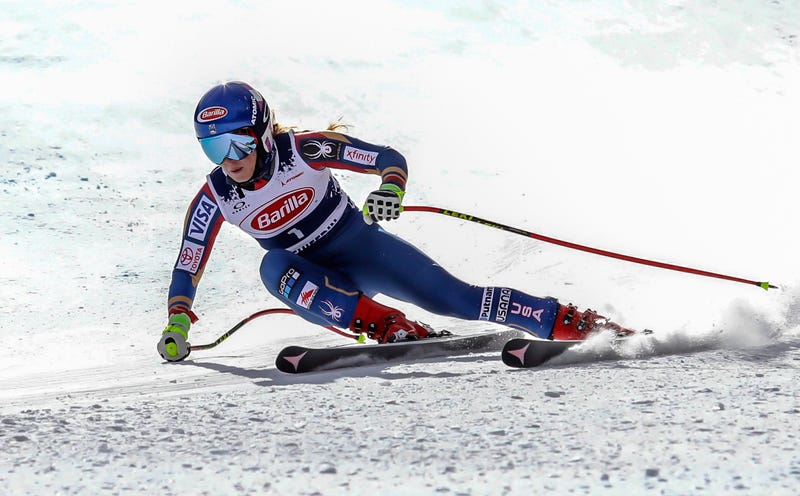 Photo credit FILE - In this Nov. 15, 2017, file photo, Mikaela Shiffrin gets low in her turn during a downhill training run at Copper Mountain, Colo. Shiffrin and the U.S. women's ski team, along with the men's Europa squad, returned to snow for a June camp in Copper Mountain, Colorado. It was a chance to go fast on the slopes again after the season abruptly ended in March due to the coronavirus pandemic. (Chris Dillmann/Vail Daily via AP, File)
By The Associated Press

The road to another World Cup overall title will include no sort of home-snow advantage for Mikaela Shiffrin.

The governing body for ski racing announced Thursday the traditional North American loop will be skipped this season due to safety concerns with the COVID-19 pandemic.

The women’s World Cup won't make stops in Killington, Vermont, or Lake Louise, Alberta. The men's side won't race in Beaver Creek, Colorado, or during a separate trip to Lake Louise. Instead, the circuit is scheduled to remain in Europe during that time period beginning in late November.

The venues are slated to be back on the calendar for the 2021-22 season, according to the International Ski Federation (FIS).

The moves were made after consultation with FIS leaders, national ski associations and local organizing committees in both Canada and the United States. The federation is trying to carry out a full World Cup program while protecting the health of the participants.

There's an adapted calendar that's set to be approved in late September. The new schedule includes adding two men’s events in December in Val d’Isere, France. The planned giant slalom races will be moved up one weekend to Dec. 5-6, making room for an additional downhill and super-G on Dec. 12-13.

On the women's side, a downhill will be incorporated into the traditional weekend in St. Moritz, Switzerland, on Dec. 5-7. The venue in Courchevel, France, will be the site of a two-race technical weekend in December.

“The North American races are always a very special two weeks for the entire FIS World Cup tour and we are very disappointed that we could not find a way to have them on this year’s Alpine calendar,” FIS secretary general Sarah Lewis said in a statement. “But if there is a silver lining, it is seeing how all of our stakeholders involved with the FIS World Cup are working together."

Shiffrin, who lives in Edwards, Colorado, has captured three of the last four World Cup titles. Last season, she took a six-week break from the circuit following the death of her dad, Jeff, who died on Feb. 2 after an accident at his home in Colorado. Shiffrin returned in Are, Sweden, but the season was canceled due to the COVID-19 outbreak before she could race again.

Home snow has been friendly to Shiffrin over the years. The 25-year-old Shiffrin has six podium finishes at Killington, including four wins. The two-time Olympic champion also has four top-three finishes on the slopes at Lake Louise.

The World Cup season is set to begin Oct. 17-18 in Soelden, Austria, with the customary giant slaloms. The next stop on the tour will be the debut of host resort Lech/Zürs in Austria on Nov. 13-14. It will feature a men’s and a women’s parallel race.