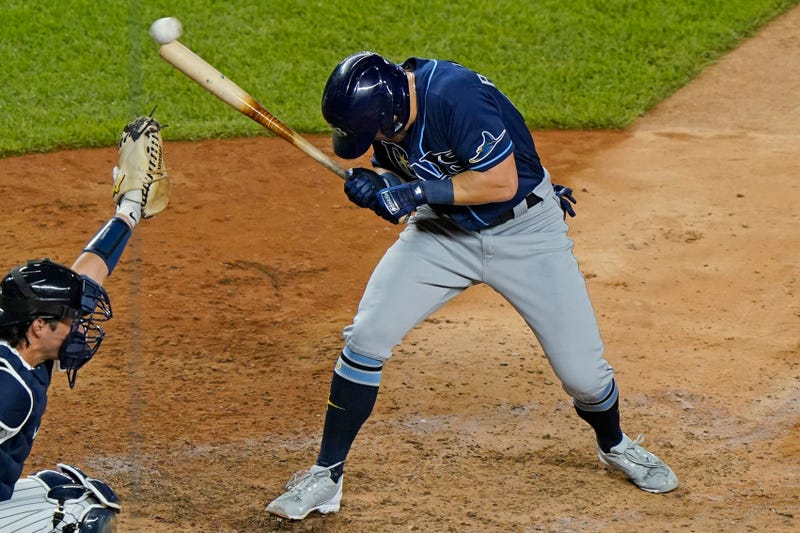 NEW YORK (AP) — Yankees closer Aroldis Chapman threw a 101 mph fastball near the head of pinch-hitter Michael Brosseau while closing out his first save of the season, prompting the benches to empty after New York ended a six-game losing streak against the Tampa Bay Rays with a 5-3 victory Tuesday night.

Chapman's first pitch to Brosseau with two outs in the ninth inning whizzed past Brosseau's head, and umpires met before issuing warnings to both benches amid a budding rivalry that's been dominated this season by Tampa Bay. The Rays are 7-2 against the Yankees and lead second-place New York by 3 1/2 games.

Chapman struck out Brosseau to end it, and Brosseau began walking toward the visiting dugout before turning back to exchange words with someone on the Yankees. The dugouts and benches emptied and players gathered near home plate, but they mostly kept their distance before dispersing to their respective clubhouses.

Teams have been warned not to leave the benches this season as part of the league's coronavirus protocols. Players on both sides seemed to be urging others to deescalate.

“Just some back and forth with obviously the ball coming close to Brosseau there," Yankees manager Aaron Boone said. "They were upset with it.”

Chapman began the season on the COVID-19 injured list. He had been 0 for 1 in save chances this season.

DJ LeMahieu homered twice, and Gio Urshela hit a tiebreaking, three-run Little League homer in the sixth inning as New York beat the Rays at Yankee Stadium for the first time this season.

Masahiro Tanaka (1-1) pitched six innings of two-run ball in his longest outing of the season. Five days after getting pulled in the fifth inning after 66 pitches at Atlanta, he allowed two runs and three hits and struck out a season-high seven batters.

The Yankees mounted a rally off Ryan Thompson (1-2) in the sixth to snap a 2-2 tie. They took a 5-2 lead when Urshela hit a sinking liner to center field for a two-run double, then scored thanks to shoddy Rays defense.

Center fielder Kevin Kiemaier attempted to make a diving catch but the ball went by him and to the warning track, allowing Luke Voit and Clint Frazier to score. Urshela took third on the relay throw and scored when shortstop Willy Adames overthrew catcher Michael Perez for an error.

Urshela slid headfirst, and his right hand touched the plate before Perez could apply the tag from Thompson’s throw. The call stood after the Rays challenged.

Urshela’s hit helped the Yankees win for the fourth time in five games following a seven-game losing streak that was their longest since June 2017.

Zack Britton pitched a hitless eighth in his return from a hamstring injury.

The Rays had their six-game winning streak snapped and also lost for only the third time in their last 16 games.

Kiermaier hit a two-run homer in the fifth off Tanaka, reaching the second deck in right field on an 0-2 slider. Willy Adames hit a solo shot in the seventh off Jonathan Loaisiga.

LeMahieu hit his 11th career leadoff homer two pitches in, sending an 0-1 changeup just over the left field fence against Trevor Richards. He homered again with one out in the third, hitting a 1-1 fastball just over the right field wall.

It was LeMahieu’s fourth career multihomer game and 71st multihit game since the start of last season, the most in the AL.

Rays: IF Yandy Díaz (strained right hamstring) was placed on the injured list, and manager Kevin Cash does not think they will know how the severity of the injury for another week. ... RHP Nick Anderson (forearm) is slated to throw about 20 pitches in a simulated game Wednesday. ... LHP Ryan Yarbrough (groin) played catch at 120 feet and will throw from 150 feet Wednesday. ... RHP Oliver Drake (biceps) threw 15 pitches in a bullpen session and will throw again Thursday.

YANKEES: SS Gleyber Torres (strained left quad/hamstring) could start getting some at-bats at the alternate training site at Scranton/Wilkes-Barre in the next day or two. ... Britton and C Kyle Higashioka were activated off the injured list. ... IF Jordy Mercer was designated for assignment. ... RHP Miguel Yajure was optioned to the alternate site. He pitched three scoreless innings his major league debut Monday.

UP NEXT: RHP Charlie Morton (1-1, 5.40 ERA) will return after missing over three weeks with right shoulder inflammation. Cash said he thinks Morton will be limited to 40-50 pitches. LHP Jordan Montgomery (2-1, 4.44) starts for the Yankees.