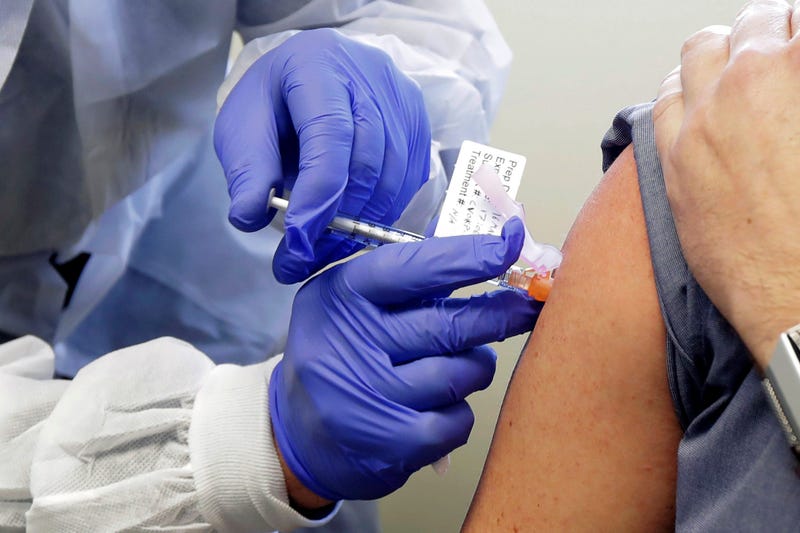 Photo credit FILE - In this March 16, 2020 file photo, a subject receives a shot in the first-stage safety study clinical trial of a potential vaccine by Moderna for COVID-19, the disease caused by the new coronavirus, at the Kaiser Permanente Washington Health Research Institute in Seattle. Britain, the United States and Canada accused Russia on Thursday July 16, 2020, of trying to steal information from researchers seeking a COVID-19 vaccine. (AP Photo/Ted S. Warren, File)
By David Caplan 1010 WINS

NEW YORK (1010 WINS) -- The testing of a COVID-19 vaccine being developed by AstraZeneca has been paused after a British volunteer experienced a "potentially unexplained illness," the drug manufacturer said Tuesday.

The testing is taking place at dozens of sites across the U.S.

The testing's "standard review process triggered a pause to vaccination to allow review of safety data," an AstraZeneca spokesperson said, according to Stat, which first reported the story.

AstraZeneca began its Phase 3 trial in the U.S. in late August. The U.S. trial is currently taking place at 62 sites across the country.

It is unknown if the drug maker or a regulator body put the testing on hold, and whether it was done voluntarily.

The AstraZeneca spokesperson said pausing such a test is "a routine action which has to happen whenever there is a potentially unexplained illness in one of the trials, while it is investigated, ensuring we maintain the integrity of the trials."

The company is "working to expedite the review" of what happened to the volunteer, "to minimize any potential impact on the trial timeline."

Putting trials is not uncommon. It is unknown how long the pause will last.

An individual familiar with the development of the vaccine said the finding is impacting other AstraZeneca vaccine trials currently underway.