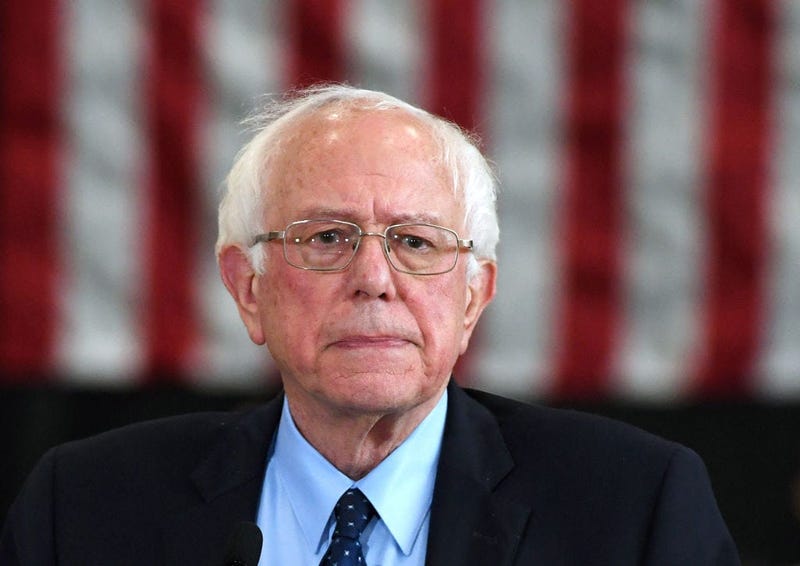 "Thanks for all the well wishes," the senator from Vermont tweeted. "I'm feeling good. I'm fortunate to have good health care and great doctors and nurses helping me to recover. None of us know when a medical emergency might affect us. And no one should fear going bankrupt if it occurs. Medicare for All!"

Thanks for all the well wishes. I'm feeling good. I'm fortunate to have good health care and great doctors and nurses helping me to recover.

None of us know when a medical emergency might affect us. And no one should fear going bankrupt if it occurs. Medicare for All!

Sanders’ wife, Jane O’Meara Sanders, was en route to Sanders in Las Vegas on Wednesday and said in an email to The Associated Press that her husband was "doing really well."

"During a campaign event yesterday evening, Sen. Sanders experienced some chest discomfort," the campaign's senior adviser, Jeff Weaver, said in a statement. "Following medical evaluation and testing he was found to have a blockage in one artery and two stents were successfully inserted.

He added, "Sen. Sanders is conversing and in good spirits. He will be resting up over the next few days. We are canceling his events and appearances until further notice, and we will continue to provide appropriate updates.

Tick Segerblom, a Clark County, Nevada, commissioner who was at Sanders’ fundraiser Tuesday said Sanders seemed fine at the time. “He spoke well. He jumped up on the stage. There was just nothing visible,” Segerblom said.

His campaign manager, Faiz Shakir, was on a telephone call with supporters Tuesday night but didn't mention any health concerns about the candidate.

Shakir said the "state of the campaign is strong" and he played up Sanders' strong fundraising total for the third quarter.

Sanders recently canceled some appearances in South Carolina because he lost his voice. The campaign said at the time he felt fine.

Sanders, the Democratic field’s oldest candidate, sometimes jokingly refers to his age at town halls and other events, especially when interacting with younger participants. His aides have tried to project him as a candidate with energy levels that surpassed his 2016 presidential campaign.

He is one of three candidates over age 70 in the Democratic primary, which has spurred debate over whether the party should rally behind a new generation of political leaders.

His health scare is certain to revive that discussion in the weeks before the next presidential debate this month.