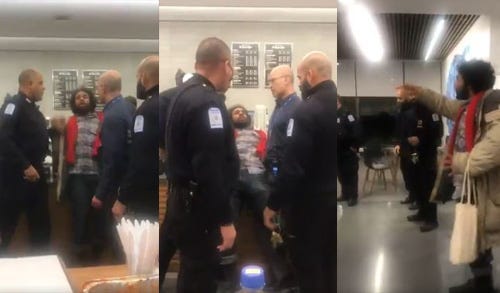 NEW YORK (1010 WINS) – The president of Barnard College is apologizing to a Columbia University student seen pinned down by security officers in a viral video that has sparked allegations of racial profiling.

The student, Alexander McNab, walked across Broadway to Barnard after a dance class at Columbia late Thursday night because he heard there was free food at the college.

A public safety officer called out to McNab, after which several other officers arrived, grabbing and pushing McNab, who had not shown them his ID.

On yesterday at Barnard College A black Columbia University student was entering the library when he was racially profiled by police (interestingly referred to as “public safety” officers). But “safe” to who?

“Take your hands off me. Take your body off me,” McNab says in the video. “I did not touch anybody. I did not violate anybody.”

“This is the third time Barnard public safety has chased me down, and you put your hands on me,” he says. “I didn’t touch any of you.”

McNab says he was racially profiled by the security officers because he is black.

The officers have been placed on leave and the college has hired an independent investigator.

Barnard College President Sian Leah Beilock sent a lengthy message to students on Sunday in which she apologized to McNab and said “the past few days have been very distressing for our entire community.”

“I sincerely apologize to the Columbia student involved and have reached out to him to better understand his experience on campus. I also apologize to the students who witnessed it and were treated disrespectfully, and to all who have felt its impact,” Beilock wrote.

“In particular, people of color have expressed to me feeling excluded or singled out in campus life, in the classroom, and, yes, in dealings with public safety. I want to say directly that I hear you and am committed to change,” Beilock wrote.