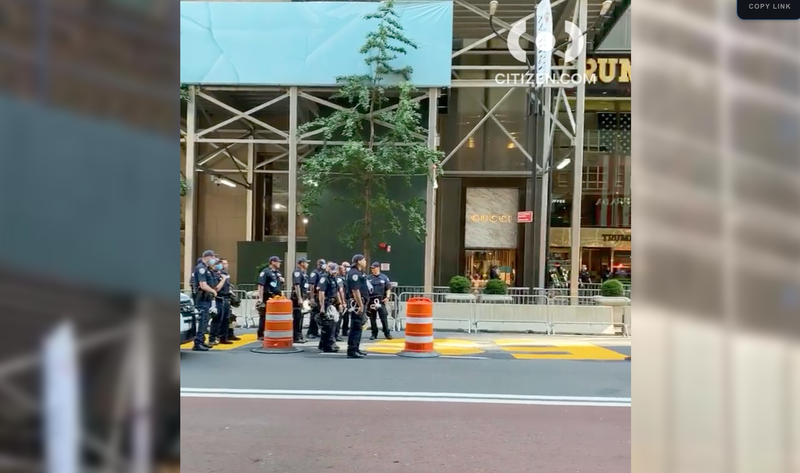 NEW YORK (1010 WINS) – Paint was splashed on the Black Lives Matter mural outside Trump Tower again on Saturday—the third time the mural has been vandalized this week.

Two women were in custody after paint was poured on the mural just after 3 p.m., police told 1010 WINS. Charges against the women were pending.

Videos online show a woman pouring paint on the mural while shouting "refund the police" and "de Blasio doesn't care about Black people."

#HappeningNow A 3rd day of vandalism at Trump Tower as 2 black women dropped black paint on the BLM Mural. One officer was injured when he slipped on the paint, he was on the ground for a while.
Desk@scootercaster.com for licensing pic.twitter.com/kxy5dohCgR

Police said an officer suffered minor injuries when he slipped on the wet paint.

One video appears to show the officer slipping on the black paint as a woman smears it on the yellow lettering of the mural.

"Thankfully our brother will be OK, but this nonsense needs to stop. Our city is in crisis. Paint on the street helps no one," the union tweeted.

Thankfully our brother will be OK, but this nonsense needs to stop. Our city is in crisis. Paint on the street helps no one. https://t.co/wEZKjMBVx5

On Friday, three people—two women and a man—were charged with criminal mischief after blue paint was poured on the same mural.

A fourth woman was issued a criminal court summons for illegal posting of flyers in that incident.

And on Monday, a man was captured on video pouring red paint on the mural.

President Donald Trump tweeted last month that the mural was a "symbol of hate" that would be "denigrating this luxury Avenue."