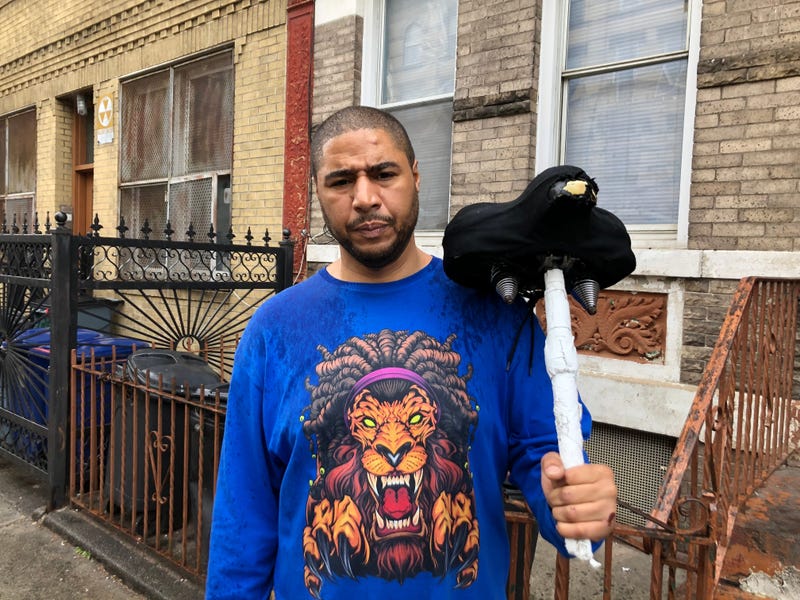 NEW YORK (1010 WINS) – A Brooklyn bodega worker who didn’t want to see a repeat of what happened to Lesandro "Junior" Guzman-Feliz last year sprung into action to help a teenager who was being violently attacked.

Vincent Milan had a big scar on the back of his head Sunday. He got it defending a 17-year-old from a group of attackers on Thursday.

The victim had run into the bodega on Knickerbocker Avenue in Bushwick while he was being attacked by the group, who also stole his moped. That’s when Milan came to the teen’s aid.

“I am a big person. How is a big person like me going to stand by and watch them drag somebody out of a store and beat on them?” Milan told 1010 WINS’ Roger Stern.

Milan barricaded the door of the store but then realized he'd have to fight the attackers.

“They’re smashing that door and they’re pushing it open,” he said.

Brooklyn man, Vincent Milan, used bicycle seat to fight attackers going after 17 yr old. He barricaded door of fruit stand when teen ran in for safety, and then confronted them when they pushed through door. Was badly cut in the back of head. #1010WINS. pic.twitter.com/MciepKngt2

“They were already on top of me, swinging whatever they had in their hands – pipes, a bat,” he said.

Milan, who fought off the attackers with a bicycle seat, was hit in the back of the head and required eight stitches.

“If that shot had been a little lower on the base of my skull – I’m gone,” he said.

Milan says he was thinking of Guzman-Feliz, who was killed with a machete outside a Bronx bodega last year.

“I’m not going to let ya’ll come in here and just drag this kid out like what happened in the Bronx,” Milan said.

The 17-year-old victim was taken to Wyckoff Hospital in stable condition.

A 16-year-old who allegedly rode off on the stolen moped was arrested and charged Thursday. A 26-year-old man, Ramon Garcia-Disla, was arrested Saturday and faces charges of robbery and gang assault.