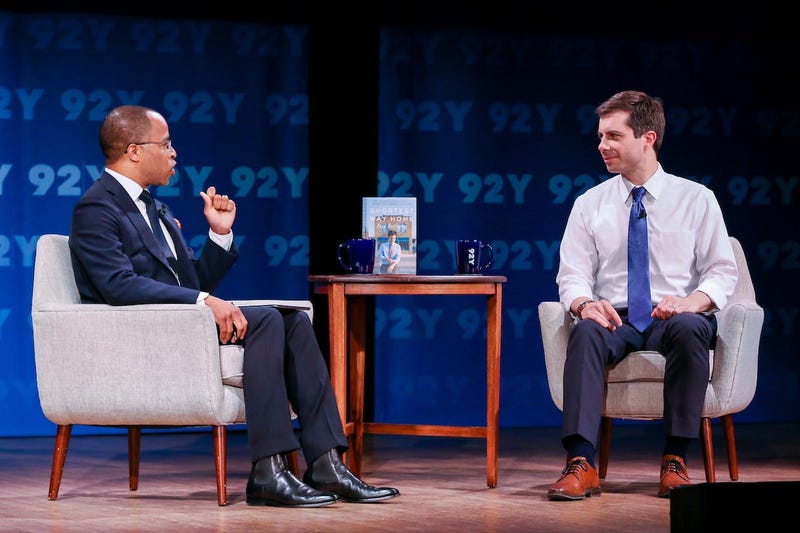 NEW YORK (1010 WINS) -- Pete Buttigieg didn't mince words about the Trump administration's foreign policy during a speaking engagement at the 92nd Street Y Wednesday night, where he also slammed the Pentagon's proposal of sending 10,000 troops to the Middle East, which will be presented to President Donald Trump on Thursday.

"First of all, the fact that an architect of the Iraq war, John Bolton, is even allowed in the Situation Room, by a president who claims, falsely of course, that he was against the Iraq war all along," Buttigieg said at the sold-out event, which was moderated by the Washington Post's Jonathan Capeheart.

When asked about the Pentagon's proposed 10,000-troop plan, Buttigieg said he was against such a move.

The Pentagon's plan it an attempt to beef up defenses against potential Iranian threats, officials said late Wednesday.

Reflecting on his own time in Afghanistan, the veteran said, "Right now, someone in Afghanistan is doing the same thing that I was doing. And I thought that I was one of the last people turning out the lights five years ago. More than that, some other person is in uniform in East Africa right now, based on the same congressional act that authorized the Afghanistan war after 9/11. That’s how loose we’ve gotten with authorizations for what has amounted to a forever war."

And in another nod to the likes of Bolton. Buttigieg said, "And to see some of the same people that got us into Iraq, now trying to apparently escalate us to Iran."

"The next president has to establish a higher bar for what it will take to deploy military force. And I say this, first of all as somebody who knows what it means to pack your bags and be deployed on the orders of a US president, and to write a letter and put it where your family can find it."

Taking aim at Trump, Buttigieg expressed concerned that the president could not handle or control the outcome of a military situation gone bad.

"And the very real possibility, given the dysfunction of this administration, that this is a situation that the president himself does not fully control or that could get to a situation where the president does not control it is terrifying, especially when you consider the fact that this White House and this administration has not hesitated to use troops as props," he said. "We saw it at the border. We saw the saber rattling around Venezuela; I mean it’s awful over there."