NEW YORK (1010 WINS) -- After 16-year-old Greta Thunberg was named Time Magazine’s "Person of the Year" for 2019, President Donald Trump had something to say.

In true Trump fashion, he took to Twitter to attack the teen. "So ridiculous," Trump tweeted. "Greta must work on her Anger Management problem, then go to a good old fashioned movie with a friend! Chill Greta, Chill!"

So ridiculous. Greta must work on her Anger Management problem, then go to a good old fashioned movie with a friend! Chill Greta, Chill! https://t.co/M8ZtS8okzE

Her profile read: "A teenager working on her anger management problem. Currently chilling and watching a good old fashioned movie with a friend." 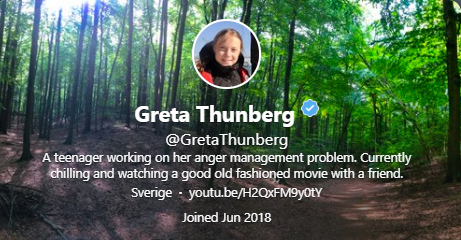 Trump previously criticized Thunberg in September, after giving a passionate speech to world leaders where she condemned the actions of the U.N..

Trump tweeted "She seems like a very happy young girl looking forward to a bright and wonderful future," Trump wrote. "So nice to see!"

In the issue, Time Magazine’s editor-in-chief Edward Felsenthal wrote about the teen, saying she "has become the biggest voice on the biggest issue facing the planet—and the avatar of a broader generational shift in our culture that is playing out everywhere from the campuses of Hong Kong to the halls of Congress in Washington."

In 2016, Trump was named Time’s "Person of the Year" after winning the presidential election against Hillary Clinton.