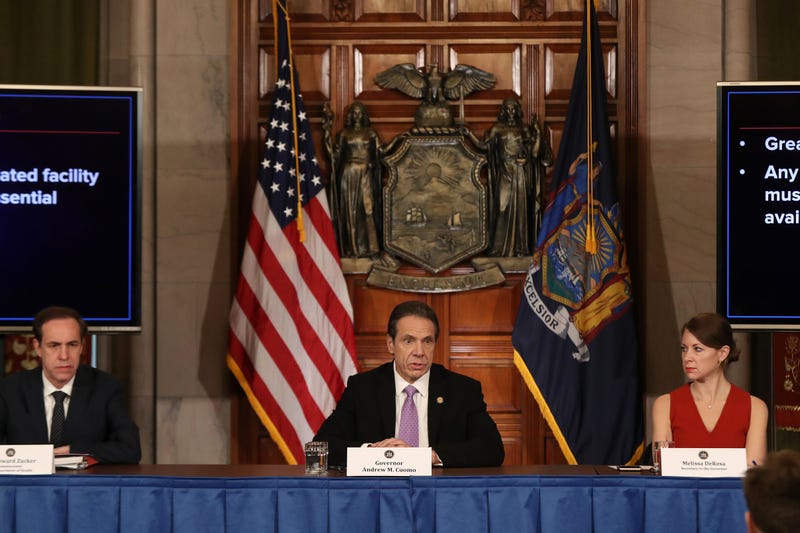 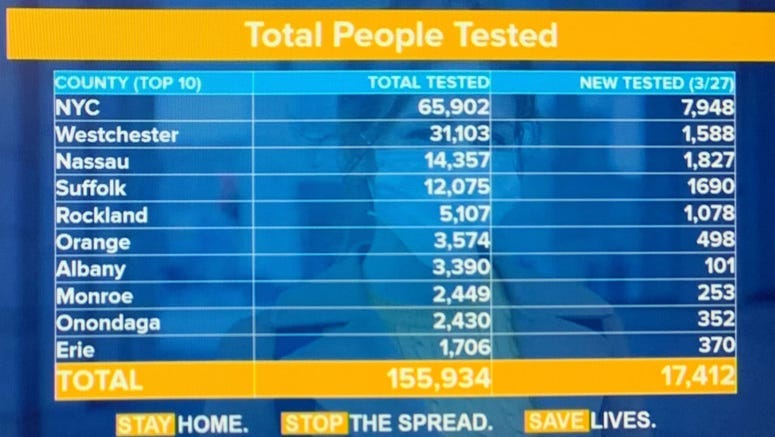 Cuomo also said he was postponing the New York presidential primary to June 23 from April 28.

New York joins over a dozen states that have delayed some elections. A smaller group including Ohio, Georgia, Louisiana, Connecticut, Maryland, Rhode Island, Indiana and Kentucky have also postponed their presidential primaries.

The governor’s decision came as election commissioners across New York warned they were “risking” their health and safety to meet impending deadlines for testing machines and preparing ballots ahead of the April 28 date.

He said the state is planning for the apex of cases, when 140,000 hospital beds and 30,000 ventilators are expected to be needed. The apex is expected to arrive in 14 to 21 days.

Cuomo said at first ventilators cost about $25,000 but that price has risen to $40,000 because they're in such high demand.

Speaking Friday at a convention center being converted into a field hospital, Cuomo said he’d seek federal help to build at least four more such temporary hospitals across New York City in the weeks ahead, each with 1,000 beds.

Every one of them will be needed, he said, to handle a crush of coronavirus patients that may require the state to nearly triple its current number of hospital beds.

More temporary hospitals are planned in the suburbs and a Navy hospital ship is due to arrive Monday in New York City.

Likening the effort to a wartime mobilization, Cuomo told New York National Guard members providing logistical support at the Jacob K. Javits Convention Center that they were on a rescue mission.

“You are living a moment in history. This is going to be one the moments they write about and talk about for generations,” he told guard members. “So I say, my friends, that we go out there today and we kick coronavirus’s ass.”

There are already more than 6,000 hospitalized COVID-19 patients in New York, with almost 1,600 in intensive care. The state has logged a nation-high of 519 deaths, and has more than 44,000 confirmed cases.

New York City Mayor Bill de Blasio gave his own grim warning later Friday, saying that Sunday, April 5 will be “a decisive moment for the city” in terms of having enough medical workers, supplies and equipment.

At a a late afternoon briefing, de Blasio said that while a majority of New Yorkers seem to be observing rules requiring them to stay at least 6 feet away from any other people while in public, he would decide this weekend whether to institute fines of up to $500 to punish scofflaws.

“I don’t want people to be penalized in a time of economic distress ... but I need people to listen,” de Blasio said.

Warm weather has continued to bring New Yorkers to city parks in droves.

The mayor also said that while most houses of worship had cancelled public services, some continued to hold communal gatherings.

If that continues this weekend, he said, police and building department officials will tell worshipers to disperse -- and if they don’t, the religious organizations may be fined and their buildings shuttered.

“You’ve been warned. You need to stop services. Help people practice their faiths in different ways,” he said.

The governor orderedschools in New York state to remain closed for another two weeks until April 15. Cuomo two weeks ago had ordered schools closed through April 1 as part of the state’s effort to slow the transmission of the outbreak.

New York City schools are closed through April 20, though officials say the city closure could last the rest of the school year.

“I don’t do this joyfully, but I think that when you look at where we are, when you look at the number of cases still increasing, it only makes sense to keep the schools closed,” said Cuomo, who added he would reassess closures closer to April 15.

The coronavirus outbreak is taking its toll on New York City’s civil servants.

Two people who helped keep New York moving during the crisis, bus operator Oliver Cyrus, 61, and train conductor Peter Petrassi, 49, were killed by the virus Thursday, according to their union.

He called transit workers “true heroes” for continuing to work during the pandemic and he demanded that transportation workers be outfitted with protective masks.

A postal worker, Rakkhon Kim, 50, died Wednesday from COVID-19-related complications, according to the National Association of Letter Carriers. Kim had delivered mail for 23 years. He worked in the Bronx and lived in Northvale, New Jersey, according to the union.

Giacomina Barr-Brown, a civilian employee who worked in a roll call office, died Thursday night in her home. Dennis Dickson, a department janitor, died earlier from complications of the disease.

“Everyone is feeling these losses deeply,” de Blasio said Friday, as he honored the public workers.

On Friday, 4,111 NYPD uniformed employees were on sick report, accounting for 11.4% of the department’s uniformed workforce. Currently, 442 uniformed members and 70 civilian members have tested positive for the virus.

De Blasio tangled with Trump again Friday after the Republican president expressed doubts about the depth of the crisis in the city’s hospital system and its urgent need for more breathing machines.

“When the president says the state of New York doesn’t need 30,000 ventilators, with all due respect to him, he’s not looking at the facts of this astronomical growth of this crisis,” de Blasio, a Democrat, said on ABC’s “Good Morning America.”

Cuomo reiterated Friday that the need for ventilators could be as high as 30,000.

“I don’t have a crystal ball,” Cuomo said. “Everyone’s entitled to their own opinion. But I don’t operate here on opinion. I operate on facts, and data, and numbers, and projections.”

Construction workers were exempt from Cuomo’s order last week requiring employees in most businesses to stay home, but that’s ending. De Blasio said Friday that he and Cuomo agreed all nonessential construction will be halted to help curb the spread of the virus.

“So, luxury condos will not be built until this is over, you know, office buildings are not going to be built so that work’s going to end immediately,” de Blasio said on the radio station WNYC. “We need to protect people.”

Under guidelines issued Friday by New York state’s economic development agency, all construction must shut down except emergency construction and essential projects such as roads, bridges, transit facilities, utilities and hospitals.