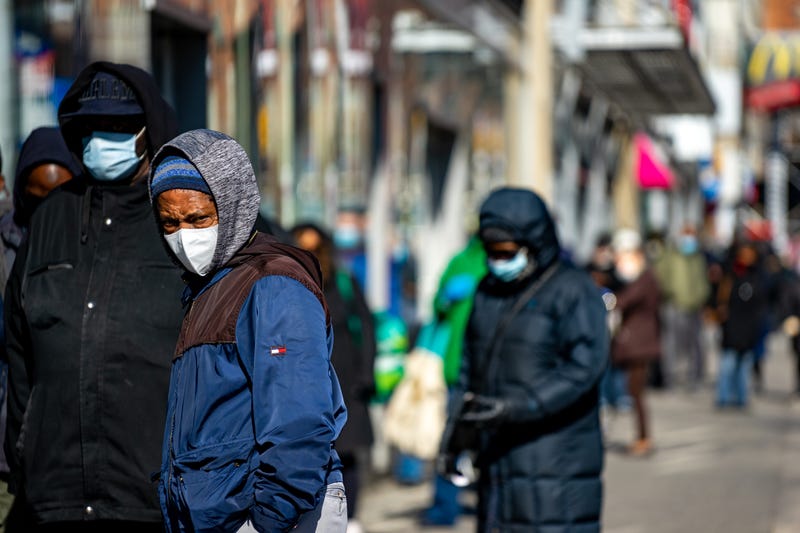 NEW YORK (1010 WINS) -- Gov. Andrew Cuomo said Thursday that the "New York Pause" intiative will be extended to May 15, guaranteeing the near-shutdown of the state for another month.

Holding a briefing with updates on #Coronavirus. Watch Live: https://t.co/D2peQvIqB1

Cuomo announced Wednesday that New York residents will be required to wear face coverings anytime they come into close contact with other people outside their homes.

The mandate will require a mask or face covering, like a bandanna, on busy streets, public transit, or any situation where people cannot maintain 6 feet of social distancing, even if it is passing a person briefly on a wooded trail. The order takes effect Friday.

“Stopping the spread is everything. How can you not wear a mask when you’re going to come close to a person?” Cuomo said at his daily briefing. “On what theory would you not do that?”

The governor, who has himself eschewed masks during his daily news briefings, though he comes within six feet of his staff, said there will initially be no civil penalties for noncompliance, but he’s urging merchants to enforce it among customers.

Cuomo said getting people back to work safely before a vaccine is developed will require not only large-scale testing, but tracing the personal contacts of people who test positive and isolating infected people.

But testing and tracing people in a state of 19 million is not possible without federal help, he said.

“That is a massive undertaking,” he said. “It’s intelligent but it’s massive.”

In the meantime, New York will begin testing 2,000 people a day for virus antibodies this week via a newly developed finger-prick test. Priority will be given to nurses, New York City police and other first responders, so they can know if they’ve been infected.

Both Cuomo and Mayor Bill de Blasio said leaders need to be deliberative about trying to rev up the economy without creating an opportunity for the coronavirus to come roaring back.

“I want to restart the economy desperately ... but the best way to do it is to be careful,” de Blasio said.

Cuomo said the state could consider lifting restrictions first for businesses that pose a lesser risk of infection and are considered more “essential.”