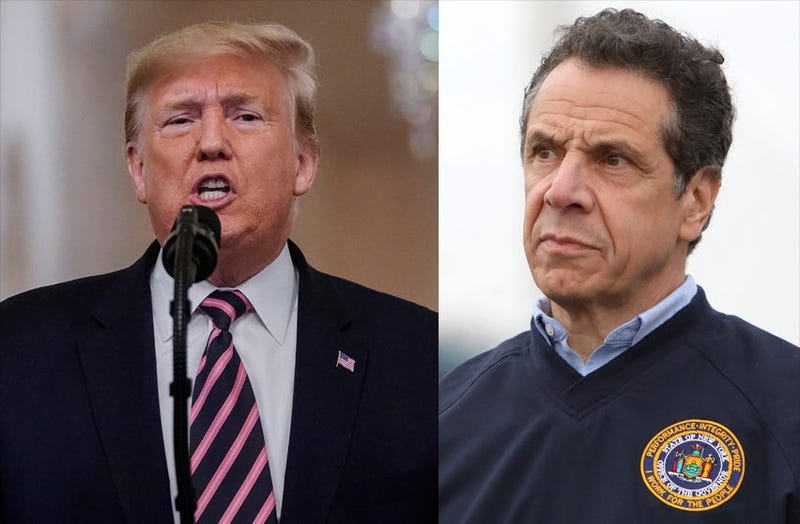 "States cannot build more hospitals, acquire ventilators or modify facilities quickly enough," Cuomo wrote. "At this point, our best hope is to utilize the Army Corps of Engineers to leverage its expertise, equipment and people power to retrofit and equip existing facilities — like military bases or college dormitories — to serve as temporary medical centers. Then we can designate existing hospital beds for the acutely ill."

He explained that this is an acceptable request, considering the country is in the midst of a national disaster.

"We believe the use of active duty Army Corps personnel would not violate federal law because this is a national disaster," he wrote. "Doing so still won’t provide enough intensive care beds, but it is our best hope."

Cuomo had other suggestions for Trump: "Mr. President, you must stop the Food and Drug Administration and Centers for Disease Control and Prevention from overregulating the testing process, and authorize states to certify a wider array of testing labs and methods."

Cuomo continued, "Mr. Trump, don’t let bureaucracy get in the way of fighting this virus. Break the logjam, let states fully take over testing so they can unleash hundreds of labs tomorrow and bring testing to scale. It is the only way we will have a chance of keeping up with the rapid spread of this contagion."

The governor also said there "should be uniform federal standard for when cities and states should shut down commerce and schools, or cancel events."

He continued, "The federal government must not only make aid available, it must also ensure that its assistance is distributed in clear, uniform ways. No state should be penalized for doing the right thing in trying to protect its residents during this crisis."

And in a dire warning, he wrote, "you must anticipate that, without immediate action, the imminent failure of hospital systems is all but certain. According to one projection, as many as 214 million people in our country could be infected over the course of the epidemic. Of those, as many as 21 million people could require hospitalization."