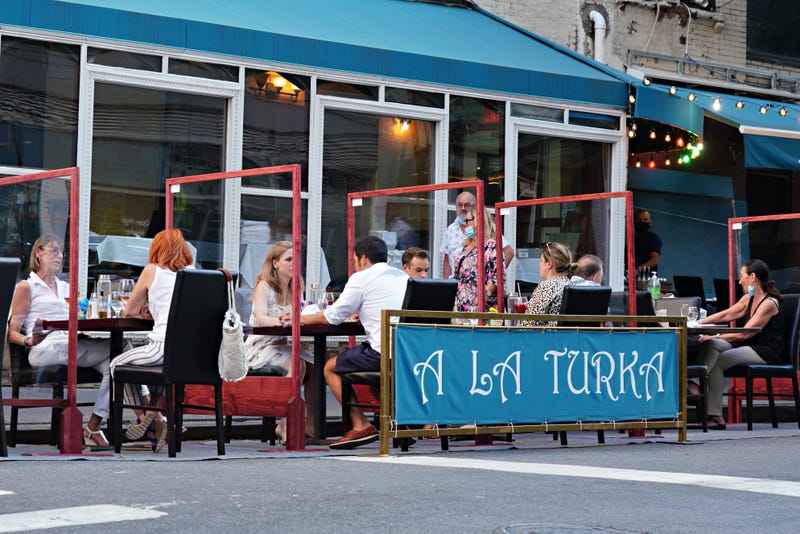 “NYC will enter Phase 3 of reopening tomorrow,” Cuomo tweeted, urging people to wear a mask, social distance and “be smart.”

Last week, Cuomo said indoor dining would be omitted from Phase 3 in the city because the return of indoor dining at bars and restaurants in other states led to a spike in cases there. Other regions of the state are allowed to have indoor dining under Phase 3.

Mayor Bill de Blasio said Wednesday that outdoor dining at restaurants, which started about two weeks ago, can continue. He said 6,600 restaurants in the city have applied for permits to serve patrons outdoors and he expects more to follow suit.

Personal care facilities are limited to 50 percent capacity inside under Phase 3, with customers required to stay six feet apart. And any procedure that requires customers to remove their face coverings is prohibited. Waiting rooms must also stay closed—customers are encouraged to book in advance.

Under the current rules, large gatherings of people are still banned in New York City, but retail stores have been allowed to welcome customers back inside and offices have reopened to workers with some social distancing rules in place.

A couple of weeks ago, the city entered Phase 2, which allowed the reopening of offices, in-store retail and outdoor dining, as well as barbers and beauty parlors, among other businesses. Manufacturing and construction started under Phase 1 last month.

The governor said 63,415 tests were conducted in New York state on Saturday and that the 533 positives represented a 0.84 percent positivity rate.

New Jersey is also taking some steps forward on Monday.

Outdoor graduation ceremonies can begin after Gov. Phil Murphy raised the capacity limit on outdoor gatherings from 250 to 500 people.

Youth day camps can also start up, provided they follow social distancing and other guidelines.

And for the first time since mid-march, New Jersey Transit plans to run a full schedule on its train and light-rail lines.

news
Is it safe for vaccinated people to socialize with each other?
news
People are getting into legal trouble for owning Elon Musk’s 'Not a Flamethrower'
music
'Saved by the Bell' star Dustin Diamond completes 1st round of chemotherapy for stage 4 lung cancer
news
Many patients must fight fear of needles before taking on COVID-19
news
240,000 cartons of chocolate milk recalled for possible sanitizer contamination
news
When could you get the $1,400 stimulus check? Analysts weigh in