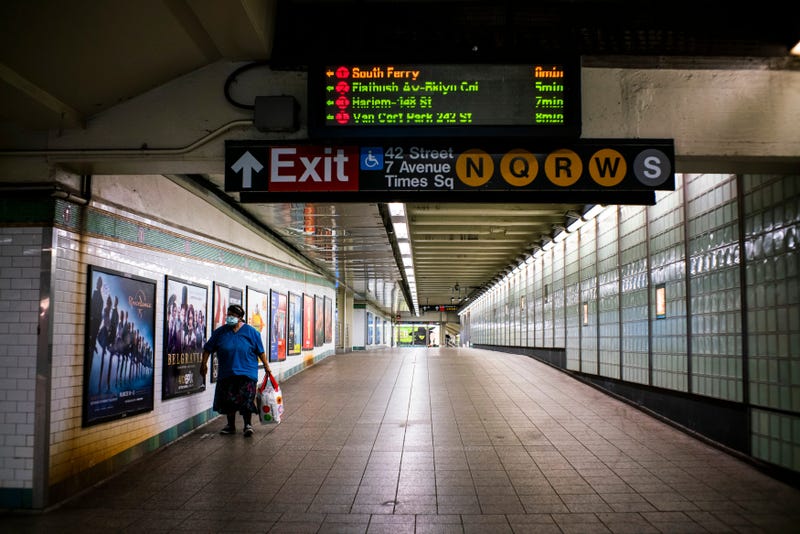 The MTA and the city have been working on a plan to keep New Yorkers safe when the city enters Phase 1 of reopening on June 8, de Blasio said during his daily briefing on Wednesday.

Rush-hour service will increase during Phase 1, and face coverings will be mandatory for all bus and train passengers, he said. The city will dole out 1 million free masks to passengers, and hand sanitizer will be available in stations, he noted.

Train stations, subway cars and buses should all have clear markings that illustrate where customers should stand, de Blasio said.

“I want to see that everywhere you go, whether it is a subway station, or on the platform, or on the train or on the bus, there are markings telling you exactly where to be,” he said. “If you’re waiting in line to get a MetroCard from the machine, here’s the marking showing you where to stand if there’s a line. If you’re on the platform, here are the markings telling you exactly where you can stand with enough distance from the person next to you.”

Subway cars and buses should also have markers indicating how many people should be riding on a given bus or car at a time, he said.

“I think it’s clear we need stated public capacity limits on buses and on trains. Some subway cars are different than others in terms of capacity,” he noted. “But let’s have the number very clear to everyone.”

Passengers, the mayor maintained, should not be seated next to one another.

“If you’re on the subway, (markings should indicate) here’s how many people should be on that train, on that car, and (should indicate) where you should stand and sit. The same with the buses. It is crucial that every other seat be blocked off, so that it’s clear you never end up sitting right next to someone,” he said. “There’s at least a seat between people.”

“I know New Yorkers,” he added. “If you experience it, if you see it with your own eyes, and you know what’s safe, you’ll get back on the train, and that’s going to help us all move forward."

While a letter the MTA sent to the mayor on Tuesday indicated that the agency planned to implement a number of the mayor's recommendations, a spokeswoman for the agency on Wednesday said blocking off seats would not be feasible.

“Like many of the mayor’s ideas — this is nice in theory but utterly unworkable,” MTA spokeswoman Abbey Collins said in a statement. “The mayor’s plan would allow us to serve only a tiny percentage of our riders — likely around 8 percent.”

“We look forward to hearing more from the mayor and the NYPD on their plans for enforcement and compliance with this proposal,” she added.

The MTA on Tuesday said regular bus and subway service would resume on June 8, but noted that the subway system would still shut down for cleaning between 1 a.m. and 5 a.m.

Overnight shutdowns will continue for the duration of the COVID-19 pandemic, an MTA spokesman said.