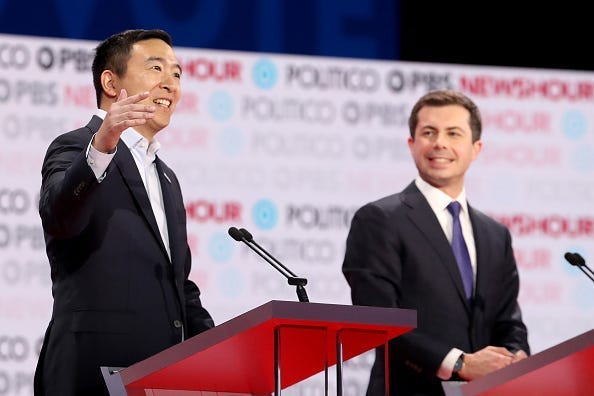 NEW YORK (1010 WINS) -- The final and fourth night of the Democratic National Convention kicks off Thursday, with a line-up of all-star politicos who are expected to rip into President Trump and explain why Joe Biden's vision is the one to embrace.

Ahead of the program -- whose theme is "America's Promise" -- the DNC released excerpts from the remarks of former Democratic presidential candidates Pete Buttigieg and Andrew Yang, as well as Atlanta mayor Keisha Lance Bottoms and Wisconsin's Sen. Tammy Baldwin.

Check back in on Thursday night at 9pm ET for live updates from RADIO.COM.

The excerpts below were provided by the DNC and prepared for delivery:

“Just over ten years ago, I joined a military where firing me because of who I am wasn’t just possible—it was policy. Now in 2020, it is unlawful in America to fire anyone because of who they are or who they love. The very ring on my finger reflects how this country can change.”

“Every American must now decide. Can America be a place where faith is about healing and not exclusion? Can we become a country that lives up to the truth that Black lives matter? Will we handle questions of science and medicine by turning to scientists and doctors? What will we do to make America into a land where no one who works full time can live in poverty?”

“You might know me as the guy who ran for President talking about math and the future. Unfortunately for all of us, that future is now.”

“I have gotten to know both Joe and Kamala on the trail over the past year —the way you really get to know a person when the cameras are off, the crowds are gone, and it’s just you and them. They understand the problems we face. They are parents and patriots who want the best for our country. And if we give them the chance, they will fight for us and our families every single day.”

“People often think they can't make a difference like our Civil Rights icons, but every person in the movement mattered—those who made the sandwiches, swept the church floors, stuffed the envelopes. They, too, changed America.”

“We have cried out for justice, we have gathered in our streets to demand change, and now, we must pass on the gift John Lewis sacrificed to give us, we must register and we must vote.”

"We all have stories like this. Stories about a time when the system was rigged against us. When we were counted out, left out, pushed out. Just think of what we’ve heard these past four days.”