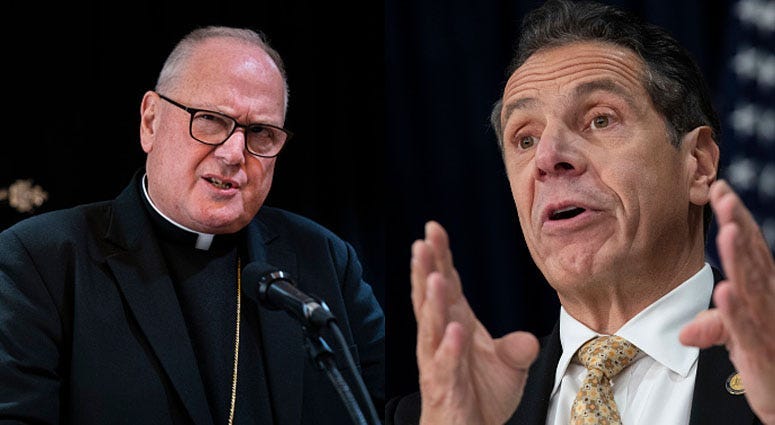 "I’m a pastor, not a politician, but I feel obliged to ask these questions, as daily do I hear them from my people, as well as colleagues from other creeds. I’ve been attacked in the past when I asked — sadly and reluctantly — if the party that my folks proudly claimed as their own, the Democrats, had chosen to alienate faithful Catholic voters. Now you know why I asked," he wrote, "As an American historian, I am very aware of our state’s past record of scorn and sneers at Catholics. It used to be called “know-nothings.” Now it’s touted as “progressivism.”

Dolan criticized what he called the state government's 'frantic rush for progressive ideas' and he specifically took aim at what he characterized as the 'ghoulish radical abortion-expansion law.'

"As if that’s not enough, instead of admitting that abortion is always a tragic choice, and that life-giving alternatives should be more vigorously promoted, the governor and his “progressive” supporters celebrated signing the bill. At the governor’s command, even the lights of the Freedom Tower sparkled with delight." Dolan wrote, "Those who once told us that abortion had to remain safe, legal and rare now have made it dangerous, imposed and frequent."

The cardinal also slammed Gov. Cuomo for comments about the Catholic church in his state of the state address, asking why the governor -- in his view -- reduced the sexual abuse of minors to being a Catholic problem.