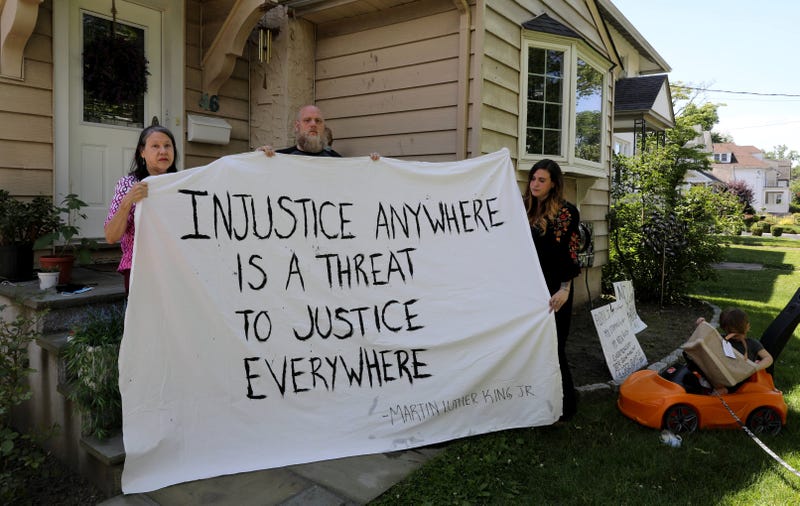 NEW YORK (1010 WINS) – A Westchester family said they were forced to remove a banner supporting the Black Lives Matter movement after their town threatened them with a $1,000 a day fine or up to a year in prison.

The banner outside a home in Eastchester featured a quote by Martin Luther King Jr.: “Injustice anywhere is a threat to justice everywhere.”

Eastchester officials told the Journal News that they’d received a complaint about the banner on Webster Road, prompting a warning from the town that it was in violation of a code against banners and flags.

“Several unsuccessful attempts were made to contact the owner of the property to advise them that the banner was in violation of the Code and should be removed. After receiving no response, a notice of violation was issued,” the town said in a statement to the Journal News.

The town told the paper that the content of the banner wasn’t the issue and that signs on the family’s property supporting the Black Lives Matter movement weren’t in violation of the code.

The family reportedly took down the banner on Sunday after receiving a note Friday from the town warning it was a “prohibited sign.”

Avisia Brown, who lives at the home, told the Journal News that they put up banners for holidays like Christmas in the past and never had any issues. She said other banners in the area, including ones commemorating graduations, were still up.

"The signs weren't anything offensive, we were just promoting Black Lives Matter," she added. "It feels like we're being targeted," Brown said.