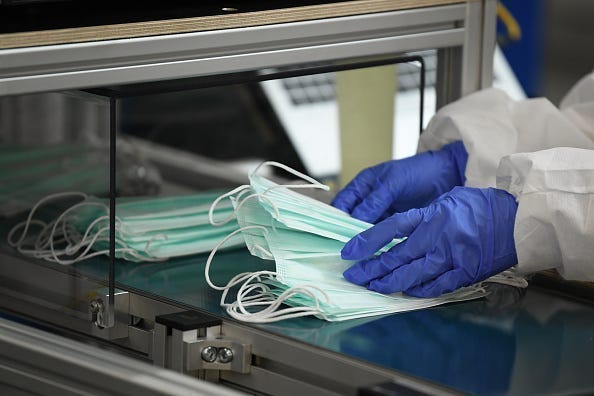 NEW YORK (1010 WINS) -- Harvard and MIT researchers are designing a face mask that would detect the coronavirus.

“As we open up our transit system, you could envision it being used in airports as we go through security, as we wait to get on a plane,” MIT researcher Jim Collins told Business Insider.

“You or I could use it on the way to and from work. Hospitals could use it for patients as they come in or wait in the waiting room as a pre-screen of who’s infected,” he adds.

Collins and his colleagues are adjusting the sensors they worked on in 2014 to detect the Ebola virus, according to the report.

The mask would begin to glow when an infected person breathes, coughs, or sneezes into it.

A sensor designed to identify the virus would give off a fluorescent signal within one to three hours.

The signal which isn’t visible to the naked eye uses a device called a flourimeter that can measure the light.

Officials could use handheld fluorimeters to scan people’s masks outside of the lab, which Collins said "cost about a dollar."

Results have been promising, but Collins said their project is still in the "very early stages."

They are debating whether to insert the sensors on the mask's inside or develop a piece that can be attached to any over-the-counter mask.

“Once we’re in that stage, then it would be a matter setting up trials with individuals expected to be infected to see if it would work in a real-world setting,” he told Business Insider, adding that by 2018, the lab’s sensors could detect viruses that cause SARS, measles, influenza, hepatitis C, West Nile, among other illnesses.

Researchers hope that by the end of summer manufacturing of the masks for public distribution can begin.

"Right now we’re time-constrained and talent-constrained in that we’ve got a relatively small team,” Collins said. “We’re limited in how many we can have in the lab working, and they’re all working as hard as they can."

Trending Coronavirus Coverage From RADIO.COM—Disney World receives guidelines for when parks eventually reopen—How likely is a second stimulus check?—Families face ‘tough love’ conversations as coronavirus infects whole households—6 creative ways to celebrate Mother’s Day while social distancing—No stimulus check yet? 6 reasons why it may be held up—Doctor who pushed vitamin treatment for COVID-19 charged with fraud—Heartburn medicine being studied as possible treatment for coronavirus—30-year-old teacher dies of coronavirus after symptoms were dismissed as panic attack