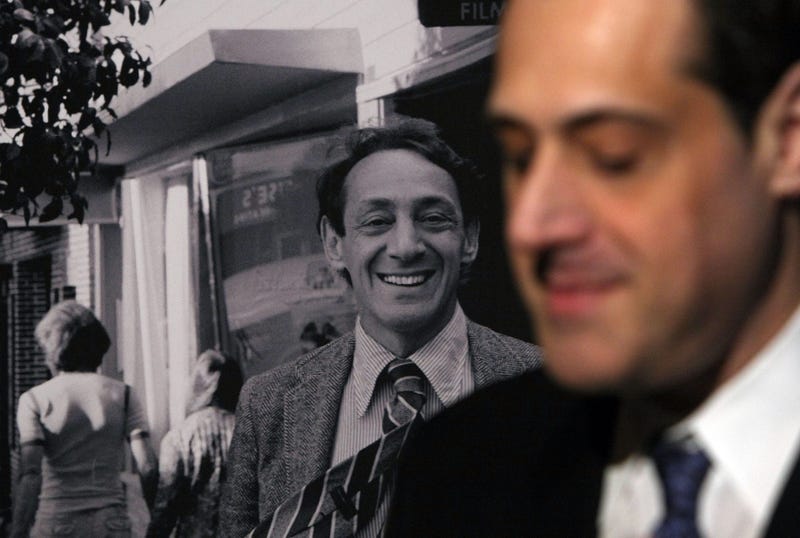 “My name is Harvey Milk and I’m here to recruit you.”

That was the first line of Milk’s famous “Hope” speech in San Francisco on the steps of City Hall during the San Francisco Gay Freedom Day Parade.

Born in Woodmere, Long Island in 1930, Milk went to college in Albany, served in the Korean War, and lived in New York City until he moved to San Francisco in 1972.

He ran unsuccessfully for a seat on the city’s Board of Supervisors. He ran again in 1976 and lost again. But in 1977, he won, becoming the first openly gay elected official in California and one of the first in the country.

One year into office, Milk and San Francisco Mayor George Moscone were murdered in City Hall by Dan White, a former city supervisor.

White’s defense was that his judgment had been impaired by a recent consumption of a lot of junk food – this became known as the “Twinkie Defense.” White was convicted of voluntary manslaughter, the lightest possible conviction for the charges. Outrage over the sentence led to violence in the streets. The “White Night riots” were arguably the most violent protests in a gay community since Stonewall.

In 2009, Milk was honored with the Presidential Medal of Freedom posthumously.

Many films were made about Milk’s life; in 2008, the movie Milk starring Sean Penn garnered Oscar wins for Penn and the screenwriter, Dustin Lance Black. Black was one of the first openly gay men to win an Oscar.

Milk knew that his political position would be groundbreaking, “We must give people the chance to judge us by our leaders and legislators. A gay person in office can set a tone, can command respect not only from the larger community, but from the young people in our own community who need both examples and hope.”

With these values in mind, the  Harvey Milk Foundation was created. Its mission statement reads:  “His courage, passion and sense of justice rocked a country and stirred the very core of a put down and pushed out community, bringing forward new hope and a new vision of freedom. As a not- for-profit global organization, our program goals – to empower local, regional, national and global organizations so that they may fully realize the power of Harvey Milk’s story, style, and collaborative relationship building – are as large and bold as Harvey taught us!”

He paved the way for others in the LGBTQ community who seek public office. Now, 41 years after Milk’s assassination, Pete Buttigieg, the mayor of South Bend, Indiana, is the first openly gay man to run for President.

Thanks to leaders like Marsha P. Johnson and Harvey Milk, I have faith in the possibility of change and growth in this country. There is still more work to do, but let us take a moment and celebrate the gains we've made this #PrideMonth.

Of politics and gays, Milk said, “So if there is a message I have to give, it is that I've found one overriding thing about my personal election, it's the fact that if a gay person can be elected, it's a green light. And you and you and you, you have to give people hope. Thank you very much.”