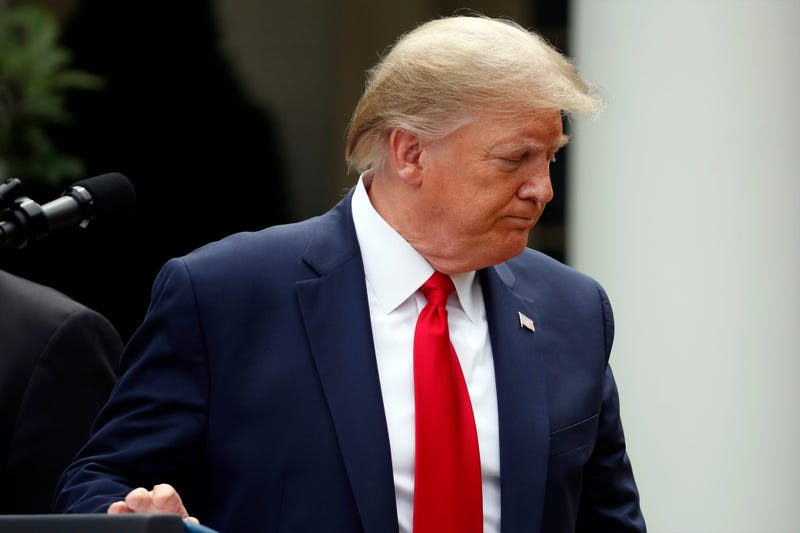 NEW YORK (1010 WINS) -- While in Florida for the historic launch of the SpaceX rocket Saturday, President Donald Trump and Vice President Mike Pence both addressed the nationwide anger over the death of George Floyd in Minneapolis Police custody that's led to violent demonstrations.

Trump spoke to reporters at the Vehicle Assembly Building at Kennedy Space Center Saturday afternoon. Here's what he said about Floyd; Pence's comments follow Trump's remarks. Transcripts were provided by the White House:

"Before going further on this exciting day for all of America and space, I want to say a few words about the situation in Minnesota. The death of George Floyd in the streets of Minneapolis was a grave tragedy. It should never have happened. It has filled Americans all over the country with horror, anger and grief.""Yesterday, I spoke to George's family and expressed the sorrow of our entire nation for their loss. I stand before you as a friend and ally to every American seeking justice and peace, and I stand before you in firm opposition to anyone exploiting this tragedy to loot, rob, and menace. Healing not hatred, justice not chaos are the mission at hand." "I understand the pain that people are feeling. We support the right of peaceful protests and we hear their pleas, but what we are now seeing on the streets of our cities has nothing to do with the memory of George Floyd. The violence and vandalism is being led by antifa and other radical left-wing groups who are terrorizing the innocent, destroying jobs, hurting businesses and burning down buildings." "The main victims of this horrible, horrible situation are the citizens who live in these once-lovely communities... The mobs are devastating the life's work of good people and destroying their dreams. We support the overwhelming majority of police officers who are incredible in every way and devoted to public service." "No one more upset than fellow law enforcement officers by the small handful who failed to abide by their oath and protect."

"And today, as states across the nation take their first steps to reopen and recover from an unprecedented pandemic and as our nation reels from the tragic death of George Floyd and violent protests of the past few days, I believe with all my heart that millions of Americans today will find the same inspiration and unity of purpose that we found in those days in the 1960s." "In America, every life matters.  There’s no tolerance for racism or violence in the streets of this country.  As the President has made clear, we will honor the memory of George Floyd, justice will be served, we will have law and order in our streets, and we will heal our land.  And as the people of this country did so long ago, we will prove again that even in the most challenging times, Americans rise above.  We always move forward, we overcome every obstacle, we reach new heights, and we reach them together. It’s true."