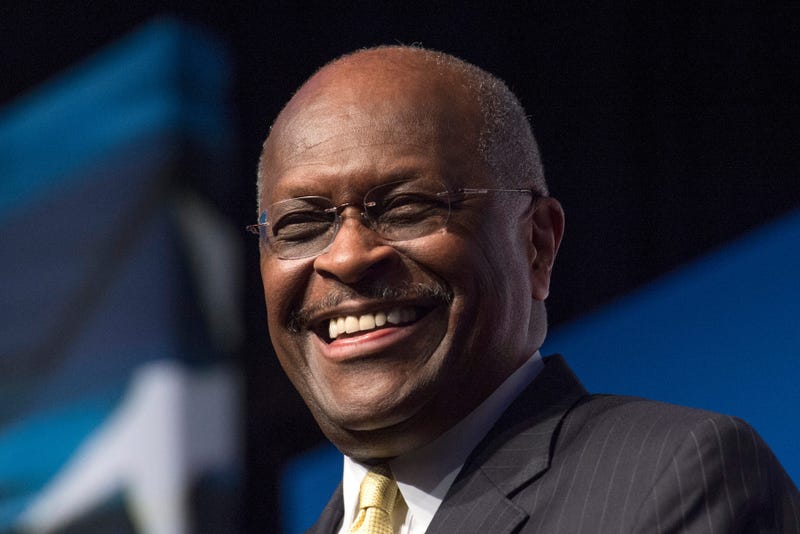 Photo credit FILE - In this June 20, 2014, file photo, Herman Cain, CEO, The New Voice, speaks during Faith and Freedom Coalition's Road to Majority event in Washington. Cain is being treated for the coronavirus at an Atlanta-area hospital. That's according to a statement posted on his Twitter account Thursday, July 2, 2020. (AP Photo/Molly Riley, File)
By David Caplan 1010 WINS

NEW YORK (1010 WINS) -- Former 2012 Republican presidential candidate Hermain Cain has died, according to a message on his website Thursday. He was 74.

Cain, a prominent African-American figure in President Trump's campaign, was hospitalized in an Atlanta-area hospital after attending Trump's June 20 rally in Tulsa, Oklahoma.

Cain, co-chair of Black Voices for Trump, did not wear a mask at the rally.

"You’re never ready for the kind of news we are grappling with this morning. But we have no choice but to seek and find God’s strength and comfort to deal with it," read the message on his website. "Herman Cain – our boss, our friend, like a father to so many of us – has passed away. He’s entering the presence of the Savior he’s served as an associate minister at Antioch Baptist Church in Atlanta for, and preparing for his reward."

The post on his website continues, "Let me deal with some of the particulars of the last few weeks. We knew when he was first hospitalized with COVID-19 that this was going to be a rough fight. He had trouble breathing and was taken to the hospital by ambulance. We all prayed that the initial meds they gave him would get his breathing back to normal, but it became clear pretty quickly that he was in for a battle."

Cain was hospitalized after developing "serious" symptoms, according to a statement on July 2.

At the time, a message on Cain's website read, "I realize people will speculate about the Tulsa rally, but Herman did a lot of traveling the past week, including to Arizona where cases are spiking. I don’t think there’s any way to trace this to the one specific contact that caused him to be infected. We’ll never know."