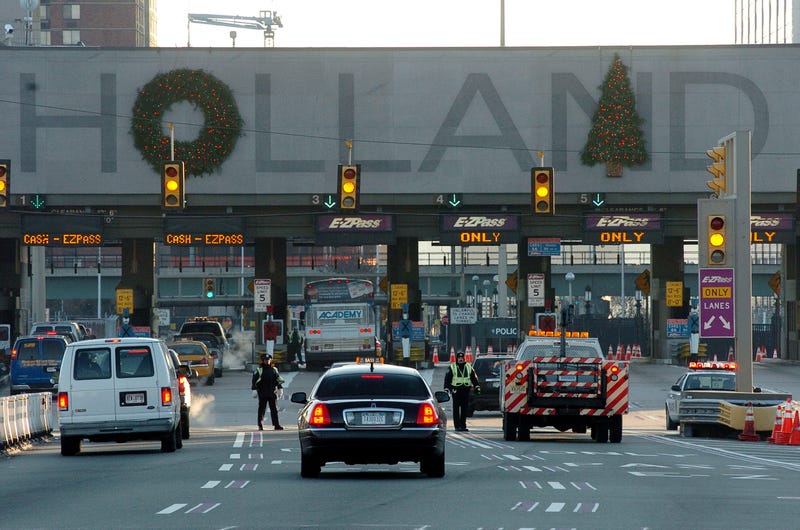 NEW YORK (1010 WINS) -- The decorations for the Holland Tunnel will begin to be installed on Monday and the Port Authority hopes that the decor will bring holiday cheers for commuters this holiday season.

After what the Port Authority called a "spirited" debate over the 2018 decorations where more than 21,000 people voted that the decorations at the Holland Tunnel were distracting, there will be a slightly larger Christmas tree placed to cover the letter "A'' this year and a wreath will cover the letter "O.'"

"I'm happy the Port Authority had some holiday fun with the public last year and showed that they do care about how we feel and what we think," Cory Windelspecht said. "I'm very happy they are keeping the holiday tradition of lighting up the Holland Tunnel alive and look forward to a great Christmas and Holiday season in New York, the greatest city in the world."There will also be a menorah placed adjacent to the toll plaza on the New Jersey side of the tunnel."Last year, we heard our decorations at the Holland Tunnel weren't up to snuff, and we took action," Port Authority Chairman Kevin O'Toole said. "This season, the design matches the results of the 2018 customer poll, complete with a newly resized tree to cover the A. It's truly a time of merriment and cheer, and we look forward to continuing our holiday traditions of decorating the New Jersey/New York crossings for our customers to enjoy."Festive decor will also be going up on the George Washington Bridge, including a tree and menorah in each toll plaza, on top of the inbound bus ramp and in the common area of the Fort Washington level of the bus station.The Port Authority Bus Terminal will be blanketed with decorations such as sleighs, reindeer and colored lights that resemble trees, wooden Nutcracker soldiers and a large menorah on the Performing Arts Stage. Wreaths will be hung from multiple locations, and candy canes and snowflakes in public facing windows in the building.Aside from decorations on the bridges and tunnels, the Port Authority is also working with local Jewish congregations to stage menorah lightings throughout the month of December.There are ceremonial menorah lightings scheduled for December 18 at the Staten Island Bridge and December 19 at the George Washington Bridge at 10 a.m., Lincoln Tunnel at 12:30 p.m. and at 1:30 p.m. at Port Authority Bus Terminal.

The ceremonial lightings will be performed by Rabbi Mordechai Kanelsky.The actual first candle lightings will occur on Sunday, December 22, the first night of Hanukkah.

The Holland Tunnel lighting will also take place on December 22.