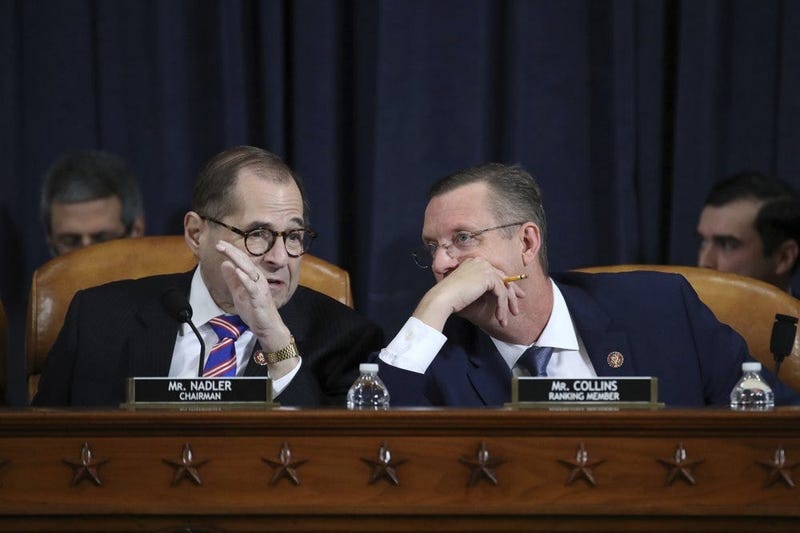 WASHINGTON (1010 WINS/AP) — The next phase of the impeachment inquiry of President Donald Trump moved to the House Judiciary Committee on Wednesday with public hearings featuring professors of law who discussed the constitutional origins of Congress' impeachment power.

Three of the lawyers were chosen by Democrats, one by Republicans, and the experts split much like the committee, along partisan lines, over whether Trump committed an impeachable offense when he asked the president of Ukraine to investigate his political rival Joe Biden.

The lofty arguments about the Constitution were frequently interrupted by partisan sniping among committee members.

White House spokeswoman Stephanie Grisham issued the following statement following the conclusion of the hearing: “Today was a good day for President Trump, and a bad day for the Democrats. The only thing the three liberal professors established at Chairman Nadler’s hearing was their political bias against the President. It did nothing to change the fact that, despite weeks of hearings in this sham process, the President did nothing wrong."

Grisham continued, "Congress should get back to working for the American people. The United States–Mexico–Canada trade agreement, infrastructure, and drug pricing all await action from Speaker Pelosi. Instead, House Democrats continue to ignore their constituents by focusing on this pathetic and desperate charade.”

Here are some takeaways from the hearing:

Republicans allied with the president used the hearing to force procedural votes and delay the proceedings, adding to an unruly atmosphere even with the professors' lofty recounting of constitutional principles.

GOP members interrupted House Judiciary Committee Chairman Jerrold Nadler and the expert witnesses, calling for more Republican witnesses, for a postponement of the hearing and for House Intelligence Committee Chairman Adam Schiff to be called as a witness. Schiff led the investigation into Trump’s dealings with Ukraine.

"What a disgrace to this committee, to have the committee of impeachment simply take from other committees and rubber stamp,” Collins said.

Collins also criticized the quick pace of the impeachment probe. Democrats hope to hold a final vote by Christmas.

"If you want to know what's really driving this, there are two things — a clock and a calendar,” Collins said.

The four law professors who testified brought history lessons to the hearing, with talk of American Founding Fathers and British monarchs, of the 18th-century Constitutional Convention and 20th century impeachment proceedings of Presidents Richard Nixon and Bill Clinton.

Their testimony had a contemporary purpose, too, as Democrats look to bolster the argument for impeachment by having outside constitutional experts make the case that Trump committed an impeachable offense.

Three of the witnesses made clear that they thought Trump's conduct met the definition of an abuse of power that the constitutional framers had in mind for removal of a commander in chief. They said the president's interaction with Ukraine amounted to high crimes and misdemeanors, the impeachment standard set out in the Constitution.

“If what we're talking about is not impeachable," said Michael Gerhardt, a University of North Carolina law professor, “then nothing is impeachable."

“The very idea that a president might seek the aid of a foreign government in his reelection campaign would have horrified them," Karlan said. “But based on the evidentiary record, that is what President Trump has done."

The lone dissenter was Jonathan Turley, a George Washington University professor, who said that although he is not a supporter of the president, he found the case against Trump legally weak and warned that it would “collapse" amid an absence of criminal intent.

There may have been four law professors at the hearing, but many of the lawmakers limited their questions to witnesses summoned by their own party — and some asked none at all.

Several GOP lawmakers, bypassing the chance to pose questions to witnesses, used their five-minute allotments with speeches that defended the president and attacked the impeachment proceedings as partisan and rushed.

Republican Rep. Jim Jordan of Ohio praised the testimony of Turley, the GOP-selected witness, but didn't actually direct any questions to him.

Republican Rep. John Ratcliffe of Texas asked a series of questions of Turley but also chose to ignore the three witnesses Democrats relied on to make their impeachment case.

Democrats mostly did the same, focusing their queries to witnesses brought in by their party. Rep. Cedric Richmond, of Louisiana, brought up Turley several times but asked other witnesses — not him — about his testimony.

Still, there were some notable exceptions, such as when Republican Rep. Matt Gaetz of Florida challenged the witnesses on what he said were Democratic biases and anti-Trump leanings. He asked all the witnesses to raise their hands if they had first-hand knowledge of the events at hand; none did.

When it was his turn, Rep. Eric Swalwell, a California Democrat, confronted Turley directly on his past statements — and even legal involvement — in prior impeachment proceedings.

MUELLER IN THE MIX

Democrats have been debating whether to include an article on obstruction of justice as laid out in the report by special counsel Robert Mueller.

That report, released in April, laid out potential acts of obstruction but declined to make a determination one way or the other about whether the president had illegally subverted the Russia investigation, with Mueller citing Justice Department guidelines that a sitting president cannot be charged with a crime. He essentially left it up to Congress to decide.

On Wednesday, Nadler signaled that he believes Mueller's findings should be included, saying in his opening statement that Trump took “extraordinary and unprecedented steps” to obstruct the special counsel's investigation.

He said that Trump not only “welcomed foreign interference in the 2016 election” — the focus of Mueller's investigation — but also “demanded it for the 2020 election.”

Democrats haven’t yet decided whether to include Mueller’s investigation in any articles of impeachment. But many members have argued that it should be included.