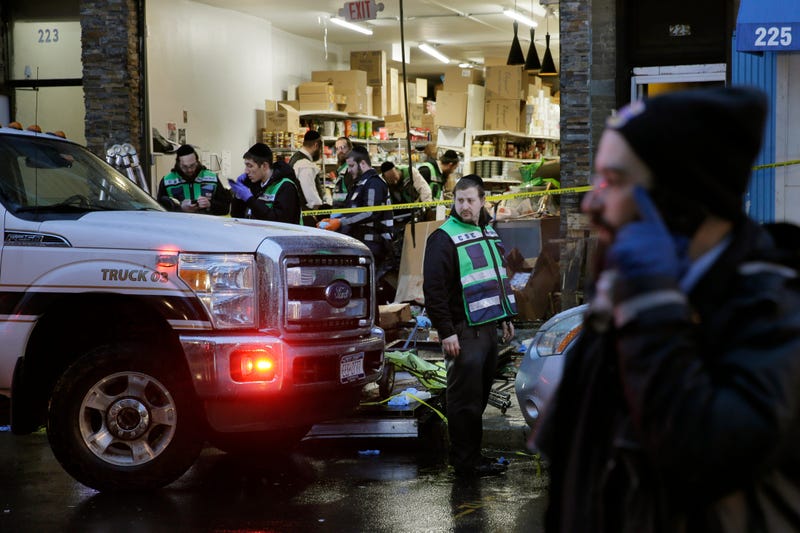 "We can see the van moving through Jersey City streets slowly. The perpetrators stopped in front of there, calmly opened the door with two long rifles," Fulop said. "Him and the other perpetrator and began firing from the street into the facility."

The motive was not addressed at the presser. Fulop added that a quick response by two police officers patrolling nearby engaged the suspects and prevented more people from being hurt.

Officials previously reported that the shooting began between police officers and the perpetrators at a cemetery, but Jersey City Safety Director James Shea said after thoroughly reviewing the video, that is not the case.

"We now know this did not begin with gunfire between police officers and the perpetrators and then moved to the store. It began with an attack on the civilians in the store," Shea said.

"Last night after extensive review of our CCTV system it has now become clear from the cameras that these two individuals targeted the Kosher grocery location on MLK Dr," Fulop tweeted.

The two gunmen, were shot and killed while inside the kosher supermarket along with three bystanders, officials say.

The suspects were identified at David Anderson and Francine Graham, according to a report from NBC 4.

Two of the victims killed inside the market were named as Leah Mindel Ferencz, of Jersey City, who owned the kosher store with her husband, and 24-year-old Moshe Hirsch Deutsch from Brooklyn. Both were members of the Hasidic community.

Officials have not confirmed the name of the third victim but NorthJersey.com identifies the third victim as Miguel Jason Rodriguez. They report that Williams Machazek, a pastor at Iglesia Nueva Vida in Newark, says Rodriguez emigrated from Ecuador three years ago and was a congregant at his church.

Out of an abundance of caution, I am directing I am directing State Police to increase patrols around synagogues & Jewish establishments across the state," Governor Andrew Cuomo tweeted. "We must stand united against anti-Semitism and hate."

My heart breaks for those killed in the attack on a kosher market in Jersey City. Out of an abundance of caution, I am directing State Police to increase patrols around synagogues & Jewish establishments across the state.

We must stand united against anti-Semitism and hate. pic.twitter.com/smoqcJnsOp

The storefront at JC Kosher Supermarket is now gone. Fulop says the community will see additional police resources in the day/weeks ahead due to an excess of caution. "We have no indication there are any further threats," Fulop tweeted.

Brooklyn Borough President Eric Adams tweeted "I’ve just learned that two of the victims in today’s #JerseyCity tragedy were natives of Brooklyn, one of them a current Williamsburg resident. This news further sharpens the pain of this #massshooting for our Jewish community. We mourn together. May their memories be a blessing."

I’ve just learned that two of the victims in today’s #JerseyCity tragedy were natives of Brooklyn, one of them a current Williamsburg resident. This news further sharpens the pain of this #massshooting for our Jewish community. We mourn together. May their memories be a blessing.

New York City councilman Chaim Deutsch of Brooklyn said he assisting with the burials of the Jewish victims.

"I have been in touch with Jersey City Mayor @StevenFulop in regards to arranging with @misaskim for religious burials for the Jewish among the deceased in today’s tragic incident," he Tweeted. "I offered prayers on behalf of our district and community, as well as our support and assistance."

Deutsch added, "The NYPD is boosting their presence at high-profile sites, including synagogues. They are working with Jersey PD and state police. Much thanks to @NYPDShea for his vigilance & constant communication. The investigation into the motive for today’s shooting is developing."

Mayor Bill de Blasio also tweeted that the NYPD is in "a state of high alert."

Although there is no credible or specific threat directed against New York City, I have directed the NYPD to assume a state of high alert.

Tonight, NYPD assets are being redeployed to protect key locations in the Jewish community. Tomorrow, we will announce additional measures.

The NYPD is boosting their presence at high-profile sites, including synagogues. They are working with Jersey PD and state police.

Much thanks to @NYPDShea for his vigilance & constant communication.

The investigation into the motive for today’s shooting is developing.

The officer who was killed was identified by officials as 39-year-old Detective Joseph Seals, who has been with the force since 2006. He is married and has 5 children. Seals was a lead officer in removing guns from the streets, Mayor Steven Fulop said.

The New Jersey Chiefs of Police tweeted, "He is a #Hero and died protecting the citizens of Jersey City!"

@JCPoliceDept Det Joe Seals has been identified as the Officer murdered in today's shooting. The 39-year-old father of 5 was killed along with 3 civilians. 2 Officers & a civilian were also wounded. Our prayers are with them and their families & friends during this terrible time. pic.twitter.com/C2CvSZMNvu

Two other officers were wounded but were later released from the hospital, officials said.

Early on in the incident, White House spokesman Hogan Gidley said President Donald Trump had been briefed on the shooting and was monitoring it, but he later tweeted about it himself.

Just received a briefing on the horrific shootout that took place in Jersey City, NJ. Our thoughts & prayers are w/ the victims & their families during this very difficult & tragic time. We will continue to monitor the situation as we assist local & state officials on the ground.

The shooting -- which kicked off around noon -- spread fear through the neighborhood, and the nearby Sacred Heart School was put on lockdown as a precaution.

SWAT teams, state police and federal agents converged on the scene, and police blocked off the area, which in addition to the school and supermarket included a hair salon and other shops. Dozens of bystanders pressed against the police barrier to capture the action on their cellphones, some whooping when bursts of fire could be heard.

Video shot by residents recorded loud volleys of gunfire reverberating along one of the city's main streets and showed a long line of law enforcement officers pointing guns as they advanced, yelling to bystanders, “Clear the street! Get out of the way!”

1010 WINS spoke with Daniel, a worker at Esperanza Restaurant, who said he saw armed officers walking past his restaurant and the shooting occurred two blocks away.

A post shared by Mother Of Two Sun Flowers 👼🏼🌻 (@desiree.uchiha)