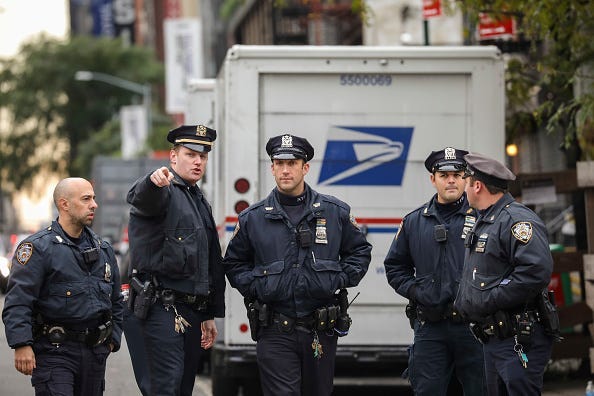 NEW YORK (1010 WINS) -- PBA President Pat Lynch was joined by members of the City Council on Tuesday, as he lobbied City Hall for a police department pay raise.

A letter from 34 council members says qualified officers are leaving the NYPD in droves to take jobs in higher-paying departments.

"New York City police officers are being severely underpaid, making it difficult for them to support their families and make ends meet. It is disgraceful that the men and women who protect one of the richest cities in America struggle to be able to feed their families and pay for basic needs. Moreover, this deficiency is detrimental to our shared goal of ensuring safety and justice for every New Yorker.  We expect a great deal from our  police officers, and it is imperative that the NYPD be able to recruit and retain the finest in order to meet those expectations," the letter said.

Pat Lynch of @NYCPBA joined by hundreds of cops as city council majority calls for raises for cops #1010wins pic.twitter.com/oIrUna85T2

Lynch thanked council members for sending the letter, adding that officers need to be paid and treated like professionals.

"I want to thank the councilmembers, those that stand here, those that signed that letter, those we hope to get to sign this letter, I want to thank them for having the courage to stand with New York police officers on these great steps and say, 'let's treat our police officers fairly, let's treat them as professionals, and let's pay them so that they can do both," he said.

While New York cops may be raking in paychecks similar to their counterparts in other big cities, the department appears to be outbid by surrounding municipalities.

In New Jersey, highly paid cops police towns with traditionally low crime rates. Saddle River cops can expect to make a median of $155,508, NJ.com reports, and dozens of towns in Bergen County alone offer similar compensation. It's not just New Jersey where salaries appear to jump -- Yonkers cops haul in $143,001, New Rochelle $120,621, and White Plains $115,122, LoHud reports. Out on Long Island, the New York Post says officers can haul in $162,000 in Suffolk and $137,000 in Nassau. Top earners in New York's suburbs were making more than NYPD Commissioner James O'Neill's $232,352 in some cases.