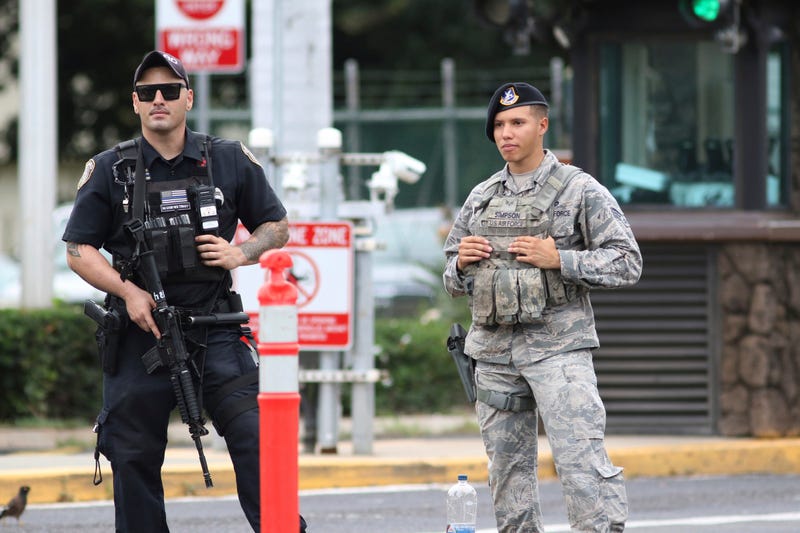 HONOLULU (1010 WINS) — Two people are dead after a U.S. sailor opened fire at the Pearl Harbor Naval Shipyard Wednesday afternoon using his military-issued service weapons, prompting the military to declare an "active shooter situation" and lock down the complex. The sailor fatally shot himself, officials said.

The two fatalities are civilian Department of Defense employees who work at the shipyard.

A third victim is at a hospital.

Officials did not suggest a motive, but he has since been identified as G Romero, 22. Neither his first name nor photo were released.

"We have no indication yet whether they were targeted or if it was a random shooting,"  Commander of Navy Region Hawaii, Rear Adm. Robert Chadwick said.

Officials at Joint Base Pearl Harbor-Hickam report the shooting incident at the Pearl Harbor Naval Shipyard has been secured. One person is confirmed dead. The shooter has been identified as a U.S. Sailor. #PearlHarbor

The sailor reportedly shot and injured three Department of Defense civilian workers before shooting themself. The incident took place this afternoon at the vicinity of the shipyard’s Dry Dock 2. The base is no longer in lockdown. #PearlHarbor

"Gates and base access are now open," read a tweet from the base at 4:11 p.m. local time. "Standby for further information regarding the active shooter incident. #JBPHH." Joint Base Pearl Harbor-Hickam spokesman Charles Anthony confirmed that there was an active shooting

About an hour earlier, the base first tweeted, "JBPHH security forces have responded to a reported shooting at the Pearl Harbor Naval Shipyard. The incident occurred at approximately 2:30 p.m. Due to the ongoing security incident, access/gates to #JBPHH are closed. We will update when we have further information."

Joint Base Pearl Harbor-Hickam is currently on lock down.