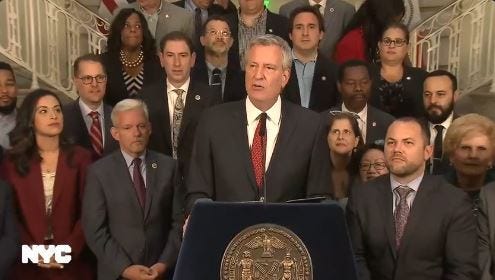 The mayor says the $92.8 billion plan balances the budget for the fiscal year 2020, which begins on July 1 of this year.

"It is balanced, it is progressive and it is on time," de Blasio said.

The mayor said the budget was founded on two key principles: investing in a fairer city for everyone and realism about the challenges the city faces.

The plan also committs $60 million to retrofitting city buildings as part of the Green New Deal; budgets an additional $275 million through 2023 for more affordable housing for seniors; and increases the city's general reserve by $150 million.

Proud to announce that New York City has agreed to a progressive, responsible and an EARLY 2020 budget. https://t.co/iKyc3AiyQG

Here are some of the highlights:

•Placing 200 additional social workers in DOE schools, including mental health specialists, to help support students and provide necessary social and emotional support ($26 million).•Investing jointly with the City Council in an expansion of criminal justice related diversion programs, such as post arrest diversion, supervised release and transitional housing. •Installing low noise “rumbler” sirens on FDNY vehicles to help reduce noise pollution ($1.5 million).•Funding for Vision Zero public awareness campaigns to educate drivers and support pedestrian and cyclist safety ($5 million).•Launching NYC Care to guarantee healthcare access for 600,000 uninsured New Yorkers and enhance MetroPlus, NYC’s Public Option, by increasing enrollment and improving access to care, including mental health services ($25 million in Fiscal Year 2020, ramping up to $100 million in Fiscal Year 2022).•Expanding 3-K for All by funding 1,900 new seats in the Bronx (District 8) and Brooklyn (District 32) for next school year. This investment brings 3-K to 14 districts and 20,000 children by September 2020, and includes the 10 highest-need districts in the city ($25 million).•Increasing Mayoral funding for 2020 Census outreach staff and public awareness campaigns to ensure a fair and accurate count that gives New York City its fair share ($22 million for a total Mayoral investment of $26 million).•Fulfilling a commitment to energy efficiency with green technology by retrofitting City buildings as part of NYC’s Green New Deal ($60 million).•Providing annual funding for the “Bridging the Gap” program that provides social services and academic support for students in shelters ($14 million).