NEW YORK (1010 WINS) – Mayor Bill de Blasio said Thursday that the city is “full steam ahead” for reopening schools in September, but Gov. Andrew Cuomo's office responded by saying the announcement was "premature."

“We are doing the work right now to make September successful, to make the new school year successful,” de Blasio said at his daily briefing. “We’re full steam ahead for September—the goal of course to have the maximum number of kids in our schools.”

In a statement released hours after de Blasio’s briefing, however, Cuomo’s communications director, Dani Lever, called the mayor’s remarks “premature,” adding that New York state “will need to see how the virus develops.” “We value the opinion of local politicians and the state’s 700 local school districts as to what should be done, but the public should not be confused on this important decision that has practical consequences for many,” Lever said.

“The state law governing schools and business closings or openings has been effect since the pandemic started and all such decisions are made by state government and not local government,” she added.

During his briefing, de Blasio said 450,000 families responded to a recent survey about schools. The survey found 75 percent of families wanted to send their children back to school in September.

De Blasio said the city is developing multiple plans and contingencies with teachers, principals and parents.

Among the precautions being taken to keep students safe are social distancing, hand washing stations and hand sanitizer throughout schools and deep cleaning every day. Face coverings will also be required, with free face coverings available for everyone who needs them.

“But we’re going to make it work to the maximum in each school, and we’re going to work with the scheduling realities to find a way,” the mayor said. “And we’re going to hope and pray in the meantime that the scientific community makes progress on this disease.”

The mayor laid out what schools may look like when they reopen in September: "Each school will have a number that is the maximum number of kids that can be in that school with social distancing, using every conceivable space in that school. We’re going to convert everything that can be converted to a classroom to a classroom to accommodate social distancing. Some schools will be able to have all of their kids when you factor in total use of space and that probably every kid will not be there, to say the least—75 percent will I believe, 25 percent may not if you believe this very, very large and comprehensive survey. So schools will be open on the first day of school, maximum number of kids in each building possible. For schools that cannot have all their kids in the building at one time, by definition, some kind of staggered schedule. That piece will be determined with the schools. That’s an ongoing conversation with the unions to see what that final configuration will be. But it will be announced well in advance of school beginning, so parents can plan. Something I think we’ll have decisions on in the next few weeks."

Schools Chancellor Richard Carranza is meeting with principals Thursday to hone their plans about how many students each school can bring back with social distancing in place, de Blasio said.

The mayor also announced Thursday that 22 Open Streets will include Open Restaurants starting the Fourth of July holiday weekend. The initiative allows restaurants to extend their dining onto sidewalks and streets to encourage social distancing; it comes a day after de Blasio announced that the city was indefinitely postponing indoor dining under Phase 3 of its reopening, which is expected to begin this Monday.

The participating streets are across all five boroughs, including Mulberry Street in Little Italy and Fifth Avenue in Park Slope.

“Some will be existing Open Streets, some will be new,” de Blasio said, adding that the new Open Restaurants will be on 2.62 miles of streets, with more to come.

“This will be for Friday nights and weekends, the times when people most want to come out to the restaurants,” the mayor said. 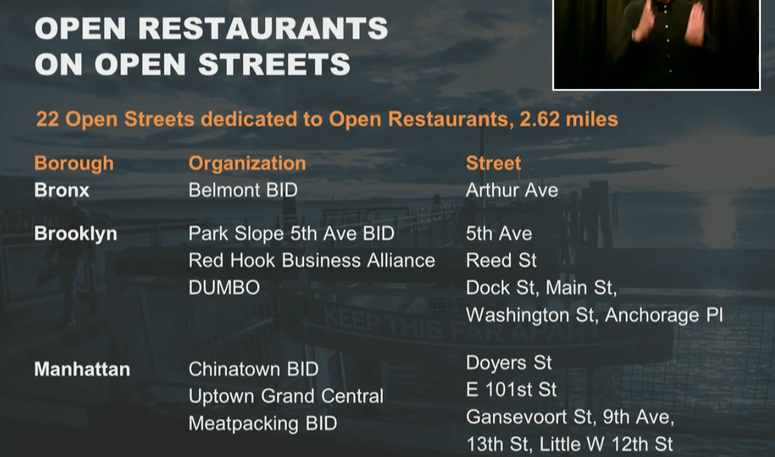 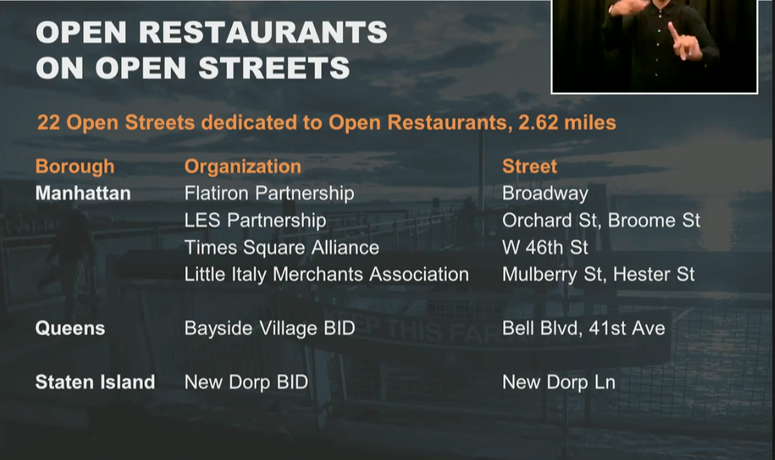 Pivoting to the Staten Island Ferry, which is now transporting nearly 17,000 riders a day, de Blasio announced that the pre-COVID rush hour schedule will return for ferries this Monday.

“More and more Staten Islanders are coming back to work,” the mayor said. “We’ve got to keep the ferry safe, we’ve got to allow for social distancing, so we’re bringing back more rush hour service.”

De Blasio also announced Thursday that alternate side parking will be suspended from Sunday, July 5, to Sunday, July 12. “Then we’ll decided in the meantime if we need to pick it up again,” he said.