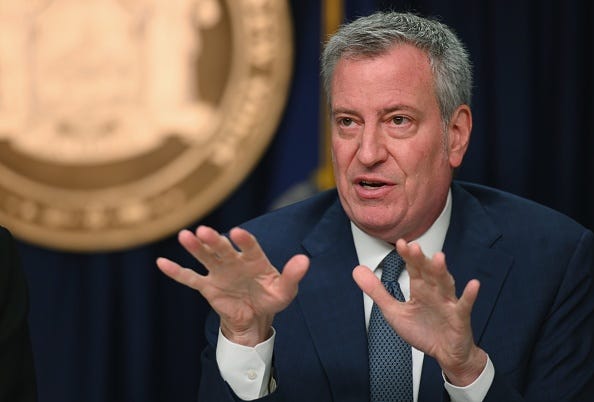 NEW YORK (1010 WINS) -- During his daily briefing on Monday, Mayor Bill de Blasio announced the city would delay layoffs to about 22,000 city workers.

According to de Blasio, the delays occurred amid ongoing negotiations with unions and in hopes to secure a state loan.

"We will hold but it will be on a day to day basis," de Blasio said. "We'll do the work together to do the work to convince Albany we need them."

Join us at City Hall. https://t.co/yEikpzgsJh

According to the mayor, no municipal worker layoffs will be announced yet as they wait for unions to identify savings and wait for Albany to pass a measure that would let the city borrow $5 billion after the federal government failed to provide another stimulus package.

"Unfortunately, the layoff notices are ready to be printed," de Blasio said. "It would be horrible for this city."

City workers were expected to receive layoff notifications that would take effect on Oct. 1.

"Time has been ticking," de Blasio said.  "And there has been no resolution."

During his press briefing, he also reported updates on plans to reopen city schools in less than two weeks.

According to the mayor, 1,321 school buildings have been inspected by the city's ventilation task force for coronavirus safety and 247 schools have approved outdoor learning plans

He also noted the importance of mandatory coronavirus testing, a safety measure repeatedly requested by the United Federation of Teachers but not included in the reopening plan.

"The important thing here is to put together a variety of measures," de Blasio said. "That to me is the best way to get it done."

De Blasio also told restaurant owners not to expect indoor dining until next spring, when he hopes a COVID-19 vaccine will become available.

"It would take a huge step forward to get to that point," de Blasio said. "So far we have not had that moment."