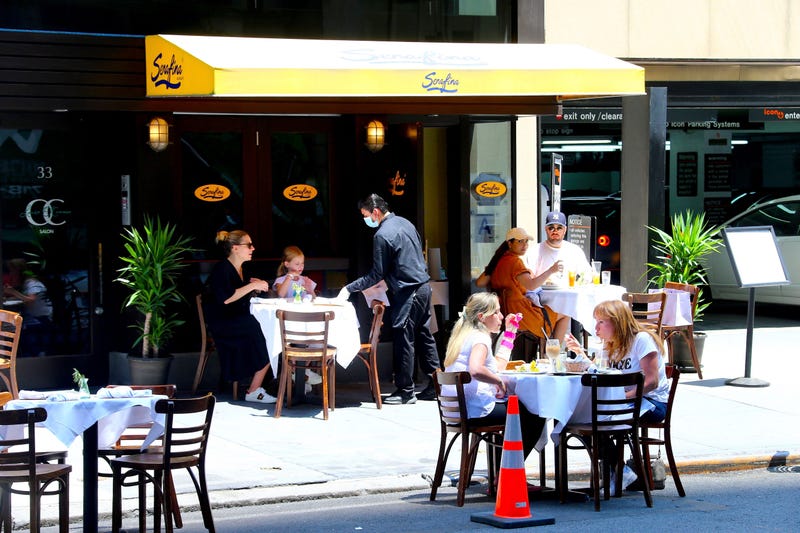 NEW YORK (1010 WINS) -- Gov. Andrew Cuomo said during a briefing on Monday that the state will decide by Wednesday whether New York City can have indoor dining at restaurants in Phase 3, which is set to begin on Monday.

According to Cuomo, there are complications that New Yorkers face as the city gears up to enter Phase 3.

One is a lack of compliance with social distancing rules and congregating in public, out-of-town visitors, and also with local government enforcement.

"It's that combination of facts that is precarious," he said.

With other states seeing an increase in positive cases, Cuomo says indoor dining poses risks and is problematic but says outdoor dining "has worked very well across the state."

"Indoor dining has shown that it has been problematic," Cuomo said.

"The virus spreads in closed indoor areas," he added.

The state will be reviewing data and consulting with NYC stakeholders about the risk and reward for indoor dining.

Cuomo also said that he has spoken with the city's comptroller, Scott Stringer, Speaker Corey Johnson, and Mayor Bill de Blasio about the future of indoor dining in New York City with a dinal decision to be made by Wednesday.

Gov. Cuomo is urging that President Donald Trump sign an executive order directing everyone to wear a mask in public. "Let the president lead by example and let the president put a mask on," Cuomo said. "We know it works."

Cuomo criticized the federal government and other states for reopening too quickly. "Reopening fast was not good for the economy," he said.

"When that virus spikes, the market goes down, not up," he adds.

"If you don't believe it's a prob, you don't try to find a solution, Cuomo said of the federal government.

As of Sunday, there were 853 coronavirus hospitalizations statewide, the lowest numbers since March 18, Cuomo says.

New York now seeing the lowest 3-day average death total since the beginning of the pandemic.

The city is working with the state to reevaluate indoor dining as other states see a surge in coronavirus cases, Mayor Bill de Blasio said during his briefing on Monday.

Join us at City Hall for an update. https://t.co/PynMcXTnzK

Gov. Andrew Cuomothis was not a to rush reopeining "this has been getting worse, it's not getting better," Cuomo said of the virus spread in other states.

Two percent of those tested were positive for the virus.