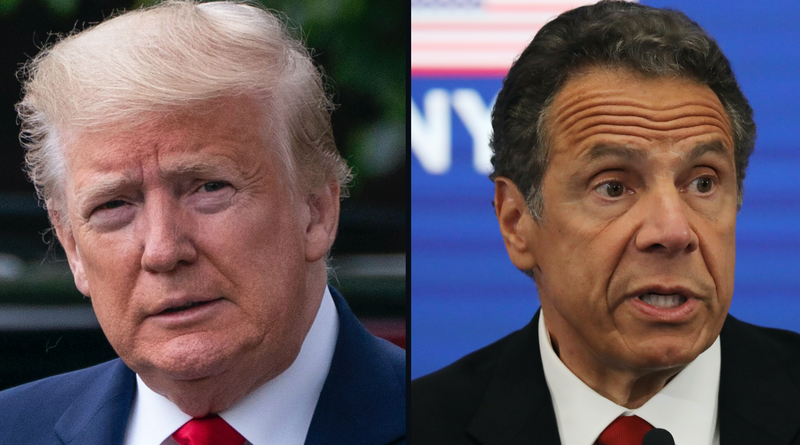 NEW YORK (1010 WINS) – Gov. Andrew Cuomo laid into President Donald Trump on Wednesday night amid reports that the president wants to pull federal funding from New York City and other “lawless” cities amid protests and cuts to police departments.

The biting comments from Cuomo came after the New York Post reported that Trump, in a five-page memo, had ordered all federal agencies to identify funding to the White House Office of Management and Budget that can be redirected from cities that have become “lawless zones.”

The “anarchist jurisdictions” mentioned in the memo are New York City, Seattle, Portland and Washington, D.C. According to the Post, New York City was targeted because of rising crime and cuts to the NYPD. The city gets some $7 billion each year in federal aid.

My Administration will do everything in its power to prevent weak mayors and lawless cities from taking Federal dollars while they let anarchists harm people, burn buildings, and ruin lives and businesses. We’re putting them on notice today. @RussVought45

“My Administration will not allow Federal tax dollars to fund cities that allow themselves to deteriorate into lawless zones,” Trump reportedly said in the memo.

In a briefing, Cuomo called the move from Trump “political” and “illegal.” He said the president has repeatedly targeted his hometown of New York City and that “the best thing he did for New York City was leave.”

“He’s not a king. He thinks he's a king but he's not. He's a president. But there's the Constitution and there are laws, nothing that he knows anything about,” Cuomo said.

The governor continued to slam Trump, calling him “the worst president in history” and saying, “he has actively been trying to kill New York City ever since he's been elected.”

President Trump has actively sought to punish NYC since day one.

He refuses to provide funds that states and cities MUST receive to recover.

He is not a king. He cannot "defund" NYC.

It's an illegal stunt.

“It’s a personal animus as it normally is with the president,” Cuomo said. “I think it's because he is from New York City and New York City rejected him always. He was dismissed as a clown in New York City.”

"New Yorkers don't want anything to do with him and he knows," the governor said.

Cuomo said Trump would "need an army" to walk down the streets of the city because he's so unpopular.

The governor appeared to clarify those remarks later in the briefing, saying: “My comment about the president and bodyguards in New York City, all I’m saying is that he is persona non grata in New York City. And I think he knows that. And he’ll never come back to New York, because New Yorkers will never forget how gratuitously mean he has been to New Yorkers and how many times he’s tried to kill the city that gave him his start and birthed him. That’s what I meant about the bodyguards.”

Trump reacted to Cuomo on Twitter on Thursday morning, focusing on his response to the coronavirus: "Governors Andrew Cuomo of New York has the worst record on death and China Virus. 11,000 people alone died in Nursing Homes because of his incompetence!"

Governors Andrew Cuomo of New York has the worst record on death and China Virus. 11,000 people alone died in Nursing Homes because of his incompetence!

Trump later tweeted that Cuomo "should get his puppet New York prosecutors, who have been illegally after me and my family for years, to investigate his incompetent handling of the China Virus, and all of the deaths caused by this incompetence. It is at minimum a Nursing Home Scandal - 11,000 DEAD!"

.@NYGovCuomo should get his puppet New York prosecutors, who have been illegally after me and my family for years, to investigate his incompetent handling of the China Virus, and all of the deaths caused by this incompetence. It is at minimum a Nursing Home Scandal - 11,000 DEAD!

Cuomo responded to the tweets at his Thursday press briefing, saying in part, "The president has been tweeting up a storm, as is his way. I believe the president is fundamentally a bully, which I've said to you many times. And I've known him very well for a very long period of time. It doesn't work in New York, because you can't bully New Yorkers. We just don't get bullied. We don't respond well to it."

New York Attorney General Letitia James said Thursday that the state was ready to take legal action if Trump followed through on his threat to cut off funding to New York City.

“As the nation battles a pandemic, an economic recession, and reckons with institutional racism, President Trump has decided to throw fuel on these multiple fires by threatening New York and other major cities across the country,” James said in a statement.

‘This is nothing more than a desperate, last ditch election strategy by a president too weak to lead us through these national crises,” she continued. “Sowing anger and dividing Americans are the last thing we need, and if the president actually decides to move forward with his threat to defund New York City, we will be ready to take immediate legal action. The president is not a dictator and his efforts at tyrannical rule will be met with fierce opposition. Time after time, we have beat the president in court and we have no doubt we will beat him again, if necessary.”

President Trump’s threats to deny funds to New York are nothing more than a desperate, last ditch election strategy by a president too weak to lead us through the crises our nation is facing.

“While (Trump) spent this year hiding from COVID-19, New York City led the fight back,” de Blasio wrote. “Now we’re trying to recover and he’s making unconstitutional, political threats against us. Mr. President, we’ll see you in court. We’ve beaten you there before and we’ll do it again."

While @realDonaldTrump spent this year hiding from COVID-19, New York City led the fight back.

Now we’re trying to recover and he’s making unconstitutional, political threats against us.

Mr. President, we’ll see you in court. We’ve beaten you there before and we’ll do it again.

De Blasio continued to fire back at Trump at his daily briefing Thursday, saying "we will see you in court, and once again we will beat you in court."

"The president of the United States, a New Yorker by birth threatening to take away funding from this city while we're still in the grips of this crisis. It just makes no sense. It’s a time when we should be seeing solidarity with New York City, support for New York City, understanding for New York City, and we're seeing the opposite," de Blasio said.

"So I want to speak directly to the president: Mr. President, we asked you to help New York City and you weren't there for us. We asked you for testing at the beginning of this crisis, it never came. We asked you for a stimulus to help us get back on our feet, you didn't lift a finger. We asked you for the truth about the coronavirus, so we could all move forward together, and you refused to tell New Yorkers and the American people what was really going on," the mayor continued.

"So you failed us and now you want to punish us? It makes no sense. By the way, your words don't carry much weight on this topic, because the Supreme Court has spoken. The president of the United States can't interfere with federal funding for cities and states just because he feels like it, we have laws in this country. So if you persist in trying to deny the funding that's keeping New York City going in the middle of this crisis, we will see you in court, and once again we will beat you in court," de blasio said.