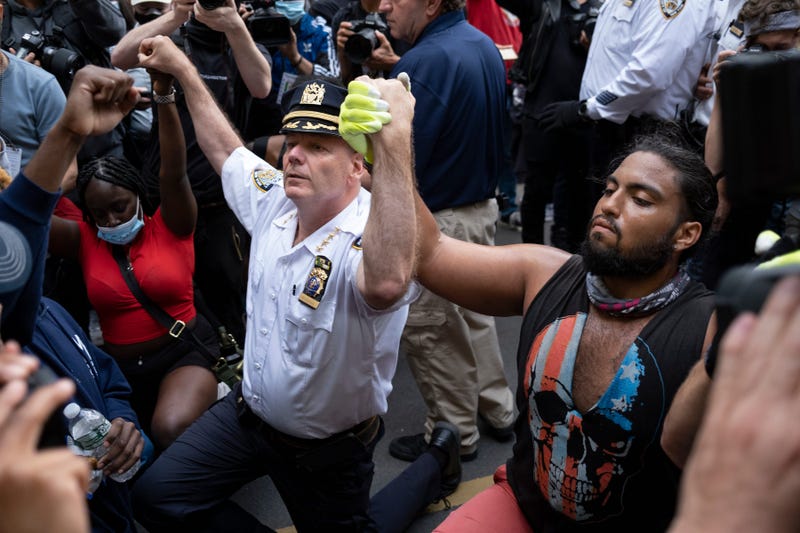 Photo credit Chief of Department of the New York City Police, Terence Monahan, takes a knee with activists as protesters paused while walking in New York, Monday, June 1, 2020. Demonstrators took to the streets of New York to protest the death of George Floyd, who died May 25 after he was pinned at the neck by a Minneapolis police officer. (AP Photo/Craig Ruttle)
By 1010 WINS Newsroom 1010 WINS

NEW YORK (1010 WINS) -- NYPD Chief of Department Terence Monahan took a knee with protesters near Washington Square Park on Monday night, in a bold statement of solidarity with protesters rallying against police brutality.

Videos posted to social media Monday evening showed protesters throw a water bottle in the direction of NYPD officers — only to be chastised by other protesters.

“We came out here to protest the violence in their system,” an attendee with a microphone said. “Don’t start throwing s--t up in here and make us f---ing look bad.”

Soon after, Monahan took the microphone and addressed the crowd.

“This has got to end. We all know Minnesota was wrong. There is not a police officer over here that thinks Minnesota was justified. We stand with you on that,” he said. “We cannot be fighting. We have to live here. This is our home.”

After Monahan spoke, he held hands with two protesters and kneeled as the crowd chanted for other officers to join him.

“Thank you for supporting us,” one protester can be heard saying. “We gotta continue supporting each other. That’s how you start.”

NYPDs top cop deescalated a situation himself. It started w/ a fight & gun found, police say. Cops blocked an exit to Washington square park. @nypdchiefofdept said let them go. 2 water bottles were thrown at cops. Protesters said STOP. Then he spoke. They said kneel w/ us. He did pic.twitter.com/eZFFa4JE8W