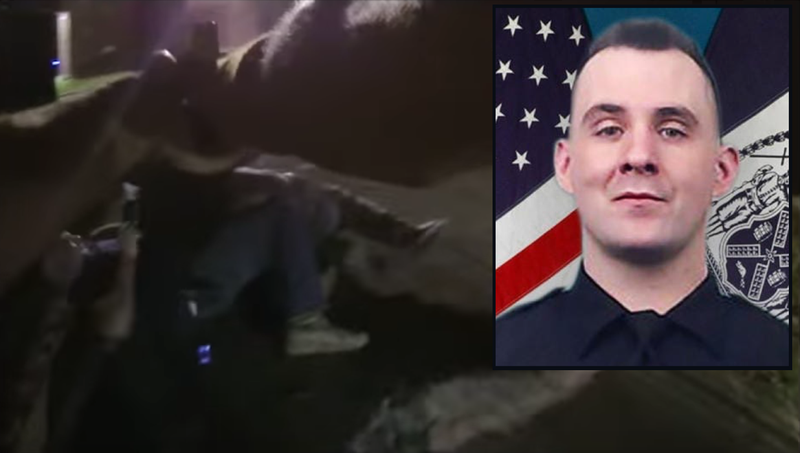 NEW YORK (1010 WINS) – Police bodycam footage from a deadly friendly fire incident in September shows NYPD officers struggling with an armed man outside a Bronx housing project before shots rang out and an officer was killed.

The footage, which was released by the NYPD Friday, shows 33-year-old Officer Brian Mulkeen grappling with the suspect, 27-year-old Antonio Williams, and shouting frantically moments before his death.

Warning: The following video is graphic.

The altercation left Mulkeen, a seven-year veteran of the force, and Williams, a convicted felon who was on probation for a drug arrest, dead.

Mulkeen was shot twice by other officers—once in the head and once in the torso, according to police.

The suspect’s loaded .32 caliber handgun was recovered at the scene, police said, adding that the gun had not been fired.

“Make no mistake, we lost the life of a courageous public servant solely due to a violent criminal who put the lives of the police and all the people we serve in jeopardy,” NYPD Commissioner James O’Neill said at the time.

Mulkeen’s death echoed that of Detective Brian Simonsen, who was killed by friendly fire in February.

Simonsen was hit once in the chest by crossfire as he and six other officers fired 42 shots at a robbery suspect who charged toward them and mimicked pulling the trigger of a fake handgun.

In more than 6½ years with the NYPD, Mulkeen made 270 arrests — many of them for felonies, including possession of illegal guns.

Mulkeen, who lived in Yorktown Heights with his girlfriend, an officer in a different Bronx precinct, started his law enforcement career as a dispatcher for the police department in Tuxedo, a town near Monroe. He joined the NYPD in January 2013.