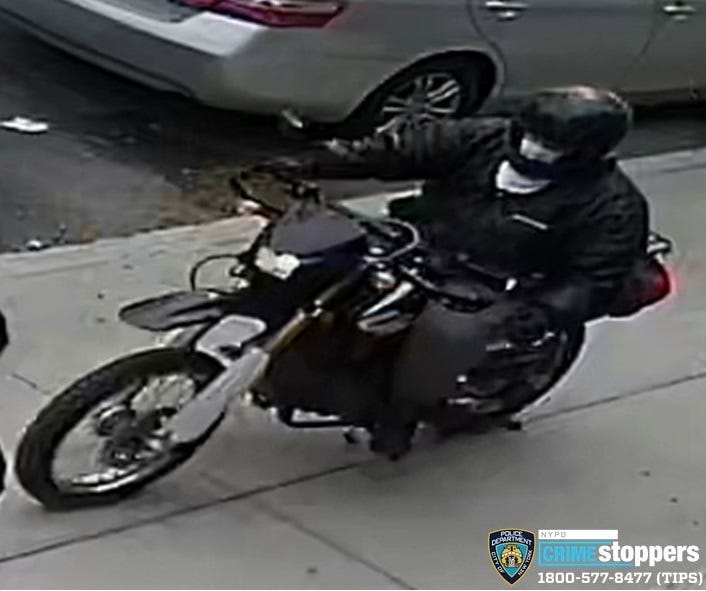 NEW YORK (1010 WINS) -- The NYPD are searching for a suspect who they say committed several robberies in Brooklyn while on a motorcycle.

Police say that on April 29, at approximately 4:30 p.m., a 46-year-old female was driving southbound on Ditmas Avenue and then stopped at a traffic light at East 7th Street in Brooklyn when someone on a motorcycle reached into the passenger side window and removed the victim's bag that had a laptop and a wallet in it.

According to police, on May 1, just before 9 p.m., a 66-year-old female was walking on the sidewalk in front of 2020 Kings Highway, the suspect snatched the victim's purse from her hand while on a motorcycle.

The suspect then fled southbound on Kings Highway.

On May 2, at approximately 9:30 a.m., police say a 31-year-old was walking on the sidewalk in front of 1832 67th Street, when a person on a motorcycle went up on the sidewalk behind the victim and attempted to grab the victim's bag causing her to fall to the ground.

The victim did not lose possession of her bag but the suspect fled westbound on 67th Street.

The victim sustained a minor injury and was treated at an area hospital.

Officials say that on May 3, just before 7 p.m., a 40-year-old female was walking on the service road at the corner of Ocean Parkway and Shore Parkway, when the suspect grabbed her bag from her shoulder containing personal papers while on a motorcycle.

Authorities say that the suspect was last seen riding a Suzuki motorcycle, with a black and red helmet and wearing a black waist length jacket, gray sweatpants, black sneakers and black gloves.

Anyone with information in regard to this incident is asked to call the NYPD's Crime Stoppers Hotline at 1-800-577-8477.