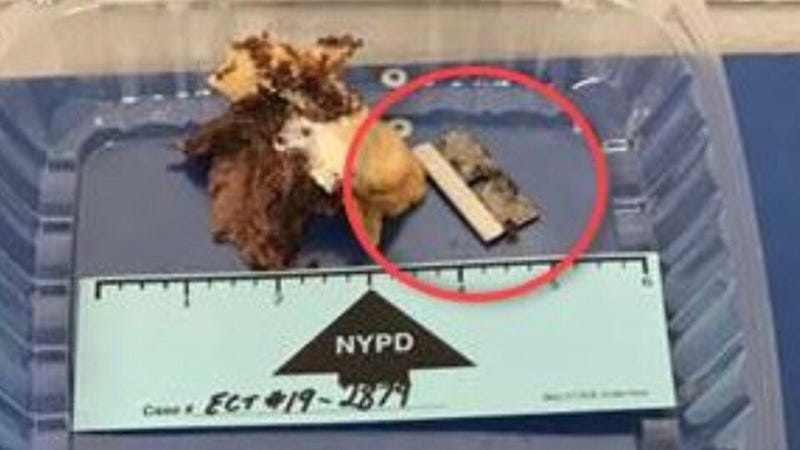 NEW YORK (1010 WINS) -- An NYPD officer is recovering after finding a razor blade in a sandwich he purchased in a Queens deli on Thursday.

Officials say the officer, at approximately 4:30, bought the sandwich at a Bon Appetit in located at 418 Beach 129 Street in Rockaway Park.

To repeat: The NYPD has ZERO tolerance for acts of violence against our police officers. A sandwich bought at a Queens deli on Thurs. contained a razor blade that cut the inside of a @NYPDCT cop’s mouth. He’ll be OK, but a full investigation into this abhorrent act is underway. pic.twitter.com/nljW9Er2Uw

An NYPD spokesman said after biting into the sandwich, the officer instantly realized he had cut the inside of his mouth, the spokesman said.

After inspecting the sandwich, the officer found the blade.

He was taken to Nassau Community Medical Center where he was treated and released.

NYPD Commissioner Dermot Shea shared an image of the blade, calling it an "abhorrent act" and stating that "The NYPD has ZERO tolerance for acts of violence against our police officers."

"First, we would like to extend our deepest apologies to the officer involved in this unfortunate incident. In our experience, the NYPD officers of the 100th and 101st precincts have been an exemplary example of professionalism and service to not only our business but to our local community in the Rockaways, Queens, and New York City at large. If given the opportunity, the management of Bon Appetit would like to personally apologize to the officer and the rest of the local law enforcement community," Bon Appetit management said in a statement issued Friday.

"We are fully cooperating with the NYPD during their investigation of this incident and will share any surveillance camera footage that is available with them. In addition, we will be conducting our own internal investigation and review of our employees and food preparation processes," they added.

Officials are also testing a DNA sample recovered from the blade.

Police have launched a full investigation.