NEW YORK (1010 WINS/AP) — A power outage struck the heart of Manhattan Saturday—stranding passengers on subways, gridlocking drivers that had to navigate the streets without traffic lights and bringing the curtain down on Broadway shows—in a blackout for which the cause is still unknown.

LISTEN LIVE: Continuing coverage of the blackout and its aftermath

On Sunday, officials said that terrorism, cyber attacks and high power demand had been ruled out as a cause but that Con Edison was still working to figure out what led to the massive outage. The officials said no injuries were reported in relation to the blackout.

The outage, which stretched 30 blocks from Times Square to the Upper West Side, left around 73,000 customers without power Saturday night for about four hours.

Con Edison CEO John McAvoy said a problem at a substation caused the 6:47 p.m. power failure. Electricity was restored to customers and businesses affected by the outage by around midnight, according to a statement from the utility.

McAvoy said the exact cause of the blackout would not be known until an investigation is completed.

At a news conference Sunday afternoon, Mayor Bill de Blasio said there were no injuries due to the blackout. He also said there was no evidence of any “nefarious activity.”

“This was not a cyber attack and this was not an act of physical terrorism,” de Blasio said.

He said Con Edison is still investigating the cause and that it may take weeks to determine exactly what happened.

“It will take time to make sure we get exactly right what happened here,” de Blasio said.

In a statement, Con Edison said it “sincerely regrets” the power disruption and that “our engineers and planners will carefully examine the data and equipment performance relating to this event, and will share our findings with regulators and the public.”

.@NYCMayor on #NYCBlackout:
-"This was not a cyber attack and this was not an act of physical terrorism"
-"It will take some time to make sure we get exactly right what happened here"
-No injuries related to power outage

U.S. Sen. Charles Schumer said Sunday the Department of Energy's Office of Electricity should investigate the work being done by Con Edison to maintain and upgrade the city's power grid, an investigation he says could shed light on other national infrastructure issues.

The outage comes on the anniversary of the 1977 New York City outage that left most of the city without power.

Thousands of people crowded the streets Saturday evening, using their cellphones as flashlights while they tried to stay cool amid the humid July evening, where temperatures hit the low 80s.

For hours before the power flickered back on, doormen stood with flashlights in the darkened entrances of upscale apartment buildings along Central Park West, directing residents up flights of stairs. Police and deployed troopers directed traffic at intersections to the soundtrack of sirens and horns, while people in the neighborhood known as Hell's Kitchen took it upon themselves to guide traffic in the absence of stoplights and walking signals. 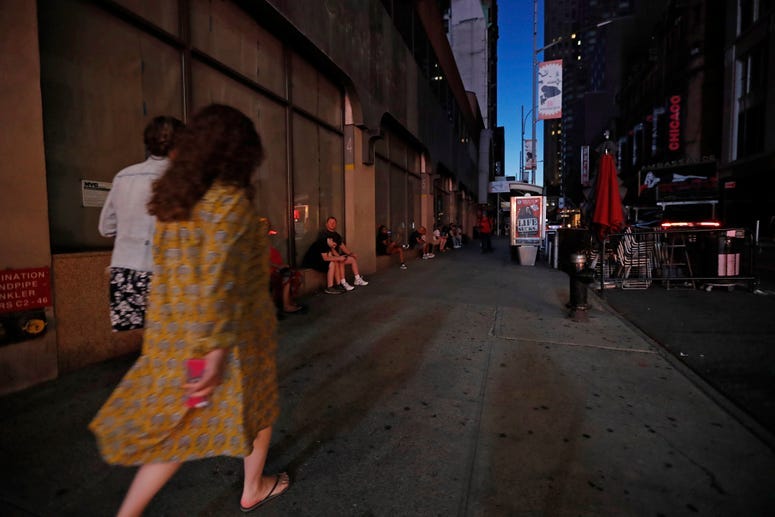 In the theater district, marquees darkened just before evening performances were set to begin. Most Broadway musicals and plays canceled their Saturday evening shows, though some cast members staged impromptu performances in the street.

Jennifer Lopez's concert at Madison Square Garden was cut short in the middle of her fourth song of the night, although officials at Penn Station below used backup generators to keep the lights on. Madison Square Garden, Carnegie Hall and the Lincoln Center for the Performing Arts were all evacuated.

Lopez later tweeted that she would reschedule the stop on her "It's My Party" tour for Monday night at the same venue.