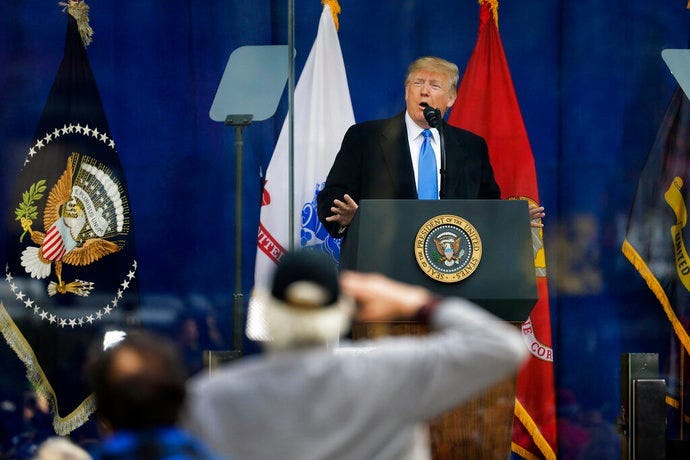 Interesting signage across from where @realDonaldTrump will make remarks for #veteransday2019 @1010WINS pic.twitter.com/qkme9PICem

Bulletproof glass barrier protected Trump as he delivered his speech Monday morning at the opening ceremony at the Veterans Day parade.

He said the nation’s veterans “risked everything for us. Now it is our duty to serve and protect them every single day of our lives.”

Trump spoke at the opening of the 100th annual parade organized by the United War Veterans Council in Madison Square Park. He is the first sitting president to accept the group’s invitation to speak at the event.

"This morning as more than 30,000 patriotic Americans line the streets of Manhattan, we carry the noble tradition that began one century ago." Trump said to an audience of veterans and their families.

Mayor Bill de Blasio was among those attending and was acknowledged by Trump.

"Today we come together as one nation to salute the veterans of the United States armed forces, the greatest warriors to ever walk the face of the earth. Our veterans risked everything for us, now it is our duty to serve and protect them every single day of our lives." Trump added.

Trump also used the event to tout the strength of the U.S. military and the death of Islamic State leader Abu Bakr al-Baghdadi, saying “al-Baghdadi is dead. His second in charge is dead. We have our eyes on number 3.”

Trump has been a longtime supporter of the parade. The New York Times reported that during the 1990s he pledged $200,000 and offered to raise money from friends in exchange for being named the parade’s grand marshal.

Trump, who is a lifelong New Yorker but recently changed his official residence to Florida, complaining about his treatment by the heavily Democratic city’s elected officials.