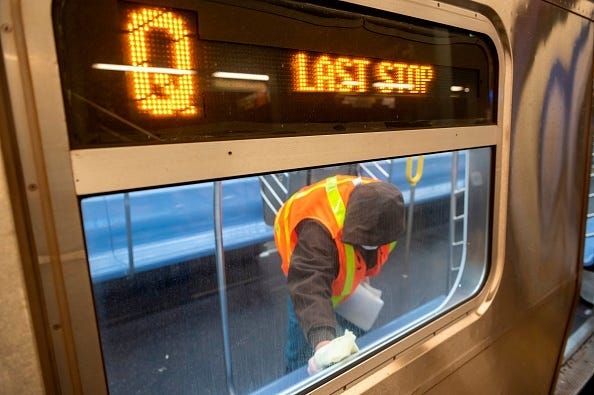 The door on a Brooklyn-bound Q train slid wide open as the train crossed over the Manhattan Bridge Sunday night, a video shows.

The clip, taken from inside the train shows as the right door open and one rider grabs onto a pole and pokes her head and arm out to capture a video.

Door Malfunction on the Q Train from r/nyc

"Both operational personnel and car maintainers are being reminded and reinstructed on protocols for isolating and securing doors when issues arise," he added.

The malfunctioning door was reported just after 8:20 p.m. after the train pulled out of Canal Street station in Manhattan, Minton said.

Passengers were evacuated and the train was taken out of service at the DeKalb Avenue station in Brooklyn at 8:32, he added.

news
Krispy Kreme and other chains offering freebies for voting on Election Day
news
What you should and shouldn’t bring to the polls this Election Day
sports
MLB rips Justin Turner for celebrating with teammates after positive test
news
WATCH: Hurricane Zeta rips the roof of a house completely off
sports
Gold Glover Kolten Wong a free agent after Cardinals decline option
news
Zeta's eye moves over New Orleans, heads for Mississippi