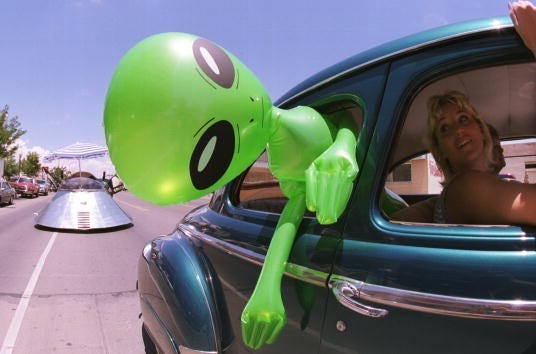 NEW YORK (1010 WINS) -- A man in Midtown is trying to do good for the world on Facebook, but why? Afterall, if aliens land on earth then none of this may matter.

Still trying to figure out what the last sentence was about? Checkout this week's Radio Free Montone.

Mike and John are back in the Big E with plenty to talk about.

- Should people just get off social media, or is there some good behind it?

- A sitcom about a family of aliens living in the suburbs, but is better for network TV or should it be streamed?

- What would really happen if aliens landed on earth? (Because John has never seen Independence Day)

- And what exactly is the most PC way to address extra-terrestrials?

It's all here in the latest episode of Radio Free Montone