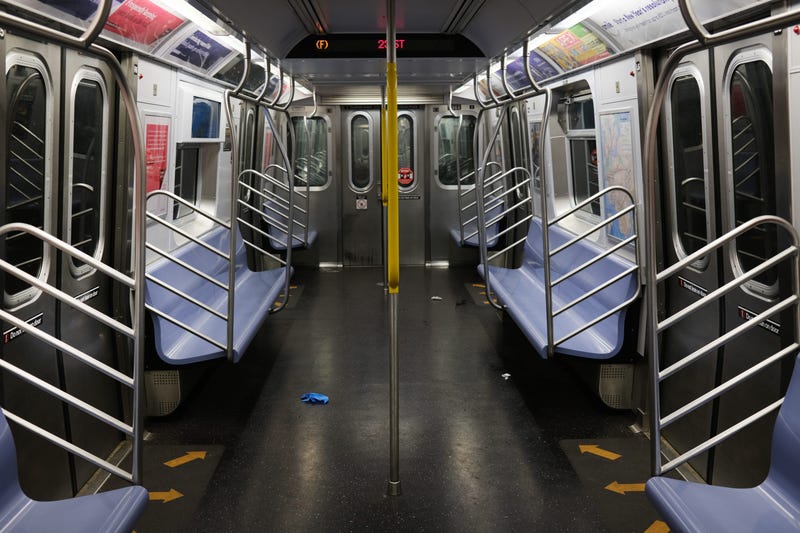 NEW YORK (1010 WINS) -- Regular subway and bus service will resume when New York City starts to reopen on June 8, but the subway system will still shut down for cleaning overnight, the MTA said Tuesday.

The subway system will still be shutting down between 1 a.m. and 5 a.m. each night for cleaning, an MTA spokesman told 1010 WINS. Those overnight shutdowns will take place for the duration of the pandemic, he noted.

In their letter, Foye and Feinberg asked New York City to supply the MTA with one million masks “for distribution to customers.” The agency also plans to dole out hand sanitizer to riders.

The MTA will need 3,000 volunteers to distribute hand sanitizer and masks to riders, Foye and Feinberg noted.

“New York City Transit currently plans to fully staff the system with these additional personnel from 5 a.m. until 8 p.m. during the first week of Phase 1, and during the morning and afternoon rush hours in the weeks following,” they wrote.

They also asked the city to "deploy additional NYPD immediately to the subway to ensure the safety and security of the system." Platform controllers, MTA police and "additional station personnel" will help with crowd control in stations, the letter notes.

"We want to make sure our system is safer than ever for riders. To do this, we will need full cooperation and resources from the NYPD," the letter reads.

Foye and Feinberg also said the MTA would advise New York City employers to stagger their employees’ shifts and continue to allow for remote work.