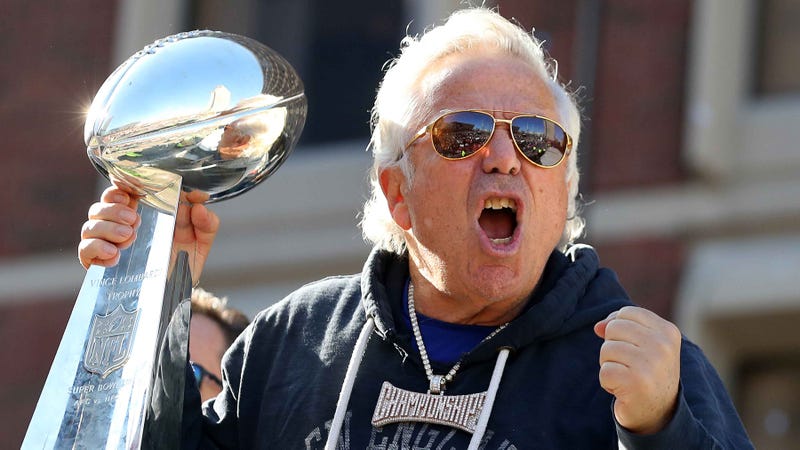 NEW YORK (1010 WINS) -- Solicitation charges against New England Patriots owner Robert Kraft have been dropped, Florida prosecutors announced Thursday, after they said they previously said they would not appeal a court ruling that threw out a video that allegedly shows Kraft paying for sex acts at a massage parlor.

According to court records with the Palm Beach County Court, the two charges of "soliciting another to commit prostitution" have been "nolle prosse" -- meaning officials are no longer seeking prosecution.

"Although there was probable cause to make an arrest, the evidence cannot prove all legally required elements of the crime alleged and is insufficient to support a criminal prosecution," the paperwork read.

Kraft pleaded not guilty to two charges of soliciting a prostitute in February 2019. He faced a year in jail and a $5,000 fine if convicted on both counts.

But the Florida Attorney General’s Office said if it challenged last month’s Court of Appeal ruling to the state Supreme Court and lost, it could have "broader, negative implications" on future law enforcement investigations.

The ruling found that police in Jupiter --  about 90 minutes north of Miami -- violated Kraft's rights when they secretly installed video cameras inside massage rooms at the Orchids of Asia Day Spa in early 2019 and banned their use at trial.

"Based on that analysis and after consulting with the prosecuting state attorney’s office, the decision was made not to seek further discretionary review," attorney general spokeswoman Kylie Mason said.

The recordings, which have not been made public, are the only known evidence that the men paid for sex.

music
Lil Nas X welcomes 24kGoldn to the club as 'Mood' hits number 1
music
50 Cent urges followers to 'VOTE for TRUMP' even though he 'doesn't like black people'
music
Mark Hoppus shares amazing throwback pic with blink-182 and Foo Fighters
sports
7 undeserving MVPs in MLB since 1980 (and who should have won)
sports
Warren Moon: Brady 'made the right decision' to leave New England
music
RADIO.COM's Back To Back: Lainey Wilson, Maren Morris, and Taylor Swift