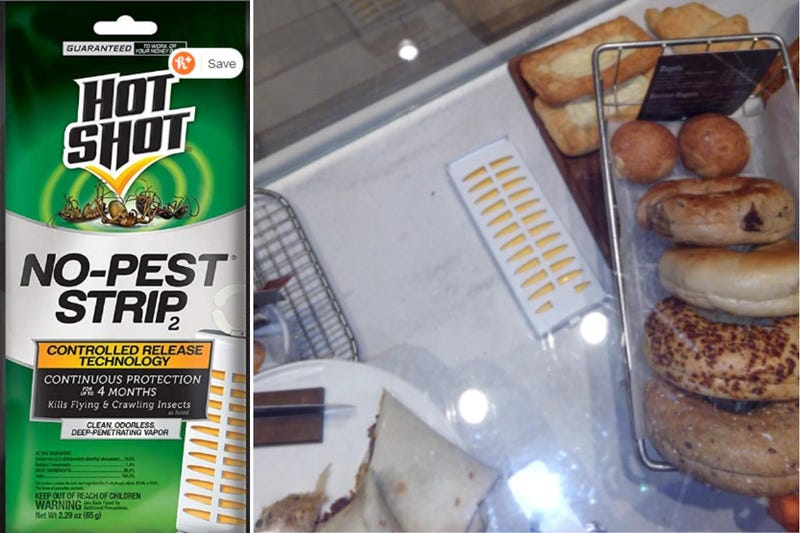 NEW YORK (1010 WINS) -- Starbucks locations in Manhattan use a harsh pesticide not recommended for use around food, exposing employee and customers to toxic chemicals, according to a pair of lawsuits filed Tuesday.

The photo above shows the pesticide strips used, but Starbucks tells 1010 WINS that those food products were not for sale -- the food at the front is for display only to give customers an idea of the food offerings.

A former Starbucks employee and two pest control workers who serviced Starbucks outlets for several years, claim the coffee giant "has for years permitted the deployment of toxic chemicals in its stores, which infused not only the food products and fixtures, but also the very air circulated throughout its retail locations in Manhattan."

The former employees claim Starbucks was "provided with no fewer than a dozen different explicit written warnings from external experts in the past three years," adding that the company "systematically and unlawfully hid these toxic products in their stores for the past several years."

The lawsuit doesn't hold back, also claiming, "Starbucks stores located throughout Manhattan –– from Battery Park to upper Manhattan –– continuously failed to take necessary or adequate measures to ensure their cleanliness and instead recklessly hid hazardous pesticides throughout their stores, including in close proximity to food and food preparation areas."

Starbucks said in a statement, "The lawsuits filed by the plaintiffs and their attorneys lack merit and are an attempt to incite public fear for their own financial gain. We go to great length to ensure the safety of our partners and customers, and we are confident they have not been put at risk. Starbucks takes the concerns of its partners very seriously and does not take action or retaliate against partners who express them."

The lawsuit includes image of the strips in the stores, as well as filthy,mold-ridden areas of stores (photos below). The exact locations were not identified in the lawsuit.

These photos, according to the lawsuit, depict "the presence of maggots and the eggs from fruit flies behind the coffee bar and under a sink in Manhattan locations."

The lawsuit identifies the pesticide used in stores as Hot Shot No-Pest 2 strips. The strips contain a toxin called Dichlorvos, which is "hazardous to humans," the lawsuit alleges.

According to Starbucks, those strips are not in use in stores.

Pest control technician Paul D'Auria, who serviced Starbuck outlets from 2015 to 2018, claims he "discovered that Starbucks management personnel routinely placed numerous sets of DDVP No-Pest Strips within virtually each of the more than 100 stores that he serviced from at least early in 2015 through June 2018, and in multiple locations in each such store."

He claims he found the strips piled on or around air vents, affixed behind the coffee bar, piled in heaps along high shelves and ledges, under and along countertops, in and next to pastry cabinets, in employee break areas and in out-of-sight areas of near-permanent filth and disrepair

Jill Shwiner, who was the Director of Operation for the company D’Auria worked for, claims she "repeatedly warned Starbucks management personnel responsible for overseeing Manhattan-area stores that the No-Pest Strips must not be used in Starbucks stores because they pose a severe health hazard. She delivered such warnings both in writing and in- person, including numerous instances when she discovered No-Pest Strips while personally on-site at various Starbucks stores in Manhattan."

Despite the warnings, the lawsuit claims that "Starbucks management personnel nevertheless continued to acquire and place new No-Pest Strips in stores throughout Manhattan."