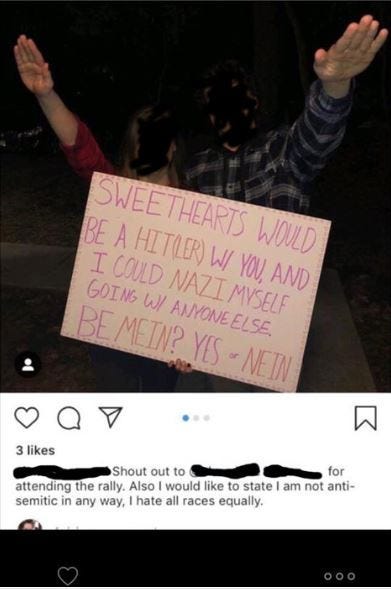 MINNEAPOLIS (AP) -- Officials at a Minnesota high school wrote to parents after two students were pictured in a social media post doing a Nazi salute and holding a sign with references to Adolf Hitler.Jeff Erikson, principal at suburban Minnetonka High School, called the post ``deeply offensive'' in his note to parents.\

The Star Tribune reported the photo on a private Instagram account showed a teenage girl and boy doing the salute as they held an apparent invitation to the school's annual Valentine's Day dance called Sweethearts.The newspaper reported the poster read: ``Sweethearts would be a Hit(ler) w/you, and I could Nazi myself going w/anybody else. Be Mein? Yes or Nein.''Steve Hunegs, executive director of the Jewish Community Relations Council of Minnesota and the Dakotas, called the image insulting.