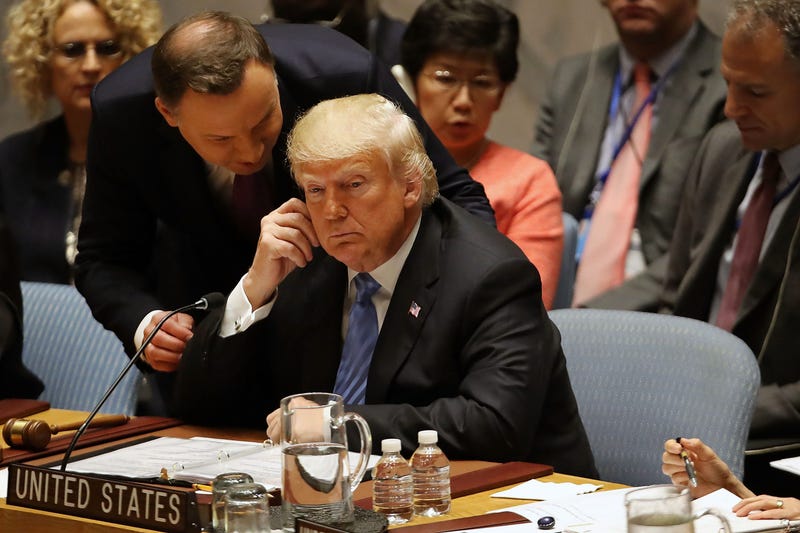 NEW YORK (1010 WINS) -- Brace yourselves, New York: Donald Trump is returning home on Sunday for most of the week.

The main reason for the president's return to the city next week is for the United Nations General Assembly, at which he is slated to speak on Tuesday.

But he has a pretty busy schedule.

The White House has announced that Trump will host and provide keynote remarks at the Global Call to Protect Religious Freedom event on Monday at the UN.  Vice President Mike Pence will also be in attendance and will introduce Trump.

"The President will call on the international community to take concrete steps to prevent attacks against people on the basis of their religion or beliefs and to ensure the sanctity of houses of worship and all public spaces for all faiths," the White House said in a statement.

On Thursday morning there will be a fundraiser breakfast, with tickets topping out at $35,000.

On Thursday night, hedge fund billionaire John Paulson will host a Trump fundraiser at his Upper East Side townhouse. Paulson is one of Trump's main economic advisers. Tickets to the invitation-only fundraiser cost $2,800 each.

Those ticket prices may sound steep, but there's even pricier Trump-related tickets to be had: On Wednesday night, there is Donald Trump Jr. and Kimberly Guilfoyle-hosted dinner. Tickets for that soiree top out at $250,000 a couple.

"As we do every year, the NYPD will use many thousands of officers to safeguard the entire two-week event and to help maintain a sense of normalcy for New Yorkers," O'Neill said Wednesday.

He added, "We’re hosting heads of state and diplomats from 193 nations – the largest gathering of world leaders all right here. A couple of thousand NYPD vehicles are part of the 200-or-so escort convoys that will drive the rest of you crazy for a couple of weeks. And, of course, personnel and expertise from our many great law-enforcement partners at the federal level will be out there, too – people with whom we work so well in many areas."