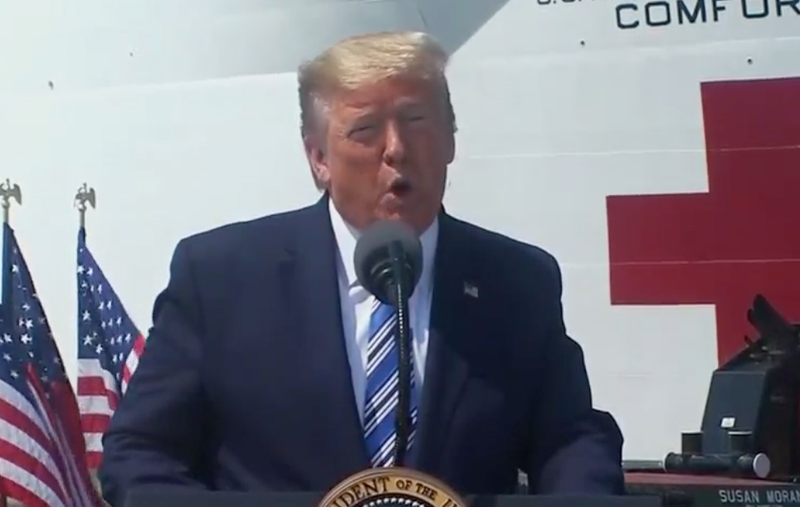 NEW YORK (1010 WINS) – President Donald Trump said Saturday that he is considering a temporary quarantine for parts of New York, New Jersey and Connecticut amid the coronavirus outbreak.

“We’d like to see New York quarantined because it’s a hotspot—New York, New Jersey, maybe one or two other places, certain parts of Connecticut quarantined," Trump told reporters. "I’m thinking about that right now. We might not have to do it, but there’s a possibility that sometime today we’ll do a quarantine—short term, two weeks for New York, probably New Jersey and parts of Connecticut.”

“We’re looking at it and will be making a decision,” Trump said. “A lot of the states that are infected—they’ve asked me if I’d look at it so we’re going to look at it. Maybe for a short period of time.”

Asked at a Saturday afternoon press conference if he’d talked with the president about the potential quarantine, Gov. Andrew Cuomo said he had not.

“I didn’t speak to him about any quarantine,” Cuomo said. “I haven’t had those conversations. I don’t even know what that means. I don’t know how that could be legally enforceable.”

On CNN Saturday night, Cuomo said he didn't think such an order would be legal and that it would lead to "economic chaos."

"I can't remember the last time this country said, 'We're going to contain you in an area.' I don't even believe it's legal. You have all sorts of provisions—state's rights, interstate commerce, etc. So it's a preposterous idea, frankly," Cuomo said. "And again it's totally opposite what the president wants to do, which is work with the states, help the states, get the economy running, and bring some sense of stability. You wouldn't at this point literally fracture the entire nation."

As President Trump weighs a possible quarantine for the New York area, Gov. Andrew Cuomo says "I don't think it's legal": "I don't believe that any federal administration could be serious about a physical lockdown ... I don't think the American people would stand for it" pic.twitter.com/YM9IXb7iZC

The federal government is empowered under the law to take measures to prevent the spread of communicable diseases between states, but it's not clear that means Trump can order state residents to stay put.

But before Trump spoke in Norfolk, Virginia, as a U.S. Navy medical ship left for New York City to help with pandemic response there, he tweeted: “I am giving consideration to a QUARANTINE of developing “hot spots”, New York, New Jersey, and Connecticut. A decision will be made, one way or another, shortly.”

I am giving consideration to a QUARANTINE of developing “hot spots”, New York, New Jersey, and Connecticut. A decision will be made, one way or another, shortly.

Speaking in front of the USNS Comfort minutes later, Trump said: "In a few moments the crew of the Navy hospital ship USNS Comfort, which is really something, will embark for New York City, where they will join the ranks of tens of thousands of amazing doctors, nurses and medical professionals who are battling to save American lives."

"This great ship behind me is a 70,000-ton message of hope and solidarity to the incredible people of New York, a place I know very well, a place I love," the president said. "We're here for you, we're fighting for you and and we are with you all the way and we always will be."

Trump said the ship's purpose will be to treat patients who don't have the coronavirus, freeing up hospital space in the five boroughs.