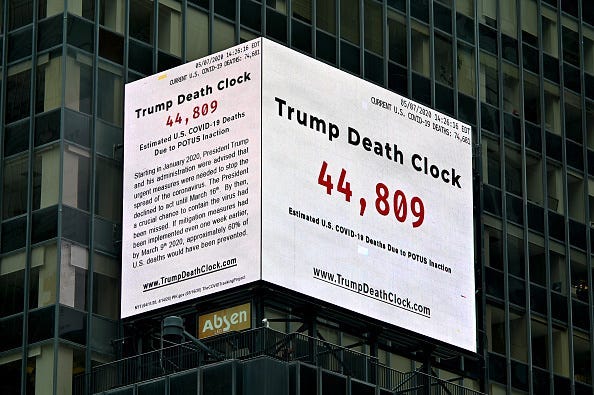 NEW YORK (1010 WINS) -- A billboard was launched in Times Square on Thursday by Filmmaker Eugene Jarecki tracking the number of coronavirus deaths in the U.S., which he has named the "Trump Death Clock."

The billboard claims that coronavirus deaths of U.S. residents are "due to POTUS's inaction."

Today we launched a HUGE statement, The Trump Death Clock went live in Times Square to hold this President to account for the estimated 60% of COVID-19 that could have been prevented. #TrumpDeathClock https://t.co/o2CrIWYh2M pic.twitter.com/O9Zr9LyaXz

President Trump's "reckless handling of the coronavirus pandemic" was directly responsible for the deaths of Americans, Jarecki told The Washington Post.

"This suffering cannot be forgotten," Jarecki wrote. "As of today, tens of thousands of Americans have lost their lives as a consequence of the administration’s failure to act sooner, so it’s no wonder the president excoriates reporters who ask him why he waited so long to implement the guidelines."

"Just as the names of fallen soldiers are etched on memorials to remind us of the cost of war, quantifying the lives lost to the president’s delayed coronavirus response would serve a vital public function," he added.

Jarecki has previously won two Sundance Film Festival Grand Jury awards for a political documentary he created and most famously co-directed the movie Freakonomics, based on the book by authors Stephen Dubner and Steven Levitt.